Home Uncategorized One of the Most Interesting Meals in the World Is Prepared in... 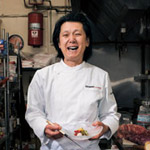 Kaz Oyama in his cramped kitchen. Photograph by Misha Gravenor.

In the March issue of Los Angeles magazine, writer David Hochman profiles Kaz Oyama and his restaurant Totoraku in “The Zen Master of Beef.” Located in a generic space on Pico, with a sign that advertises a bygone teriyaki joint, Totoraku is revered for its multicourse tasting menu, which is devoted almost entirely to beef. That’s only one reason booking a reservation here is a tall order. Executive editor Matthew Segal speaks with Hochman about the place and the story.

While Kaz Oyama’s restaurant, Totoraku, isn’t exactly invisible, he’s definitely hiding in plain sight. How did you hear about his temple of beef?
At a party last summer a friend of a friend asked if I’d been to the secret beef restaurant, assuming I knew what she meant. I didn’t. It became my obsession to land an invitation. Earlier in the summer we had gotten reservations at Noma in Copenhagen, which some say is the hardest reservation on earth to score. Getting into Totoraku was almost as hard.

You write that Oyama had been making sushi on Sawtelle when he decided to venture out on his own. In the process Totoraku becomes a form of redemption because the guy fails pretty miserably at first, right?
He failed, but he failed quickly. The original Teriyaki House Pico only lasted a month or so before Oyama-san decided it was time to rethink. The result: He opened Totoraku, which has been booked nightly almost from the beginning. We should all be such failures.

The sign on the place belongs to a short-lived lunch spot he opened. Did he leave it up by design, or is it just one of those things where he didn’t get around to changing it?
It’s a tribute to the hidden restaurants of his youth in Osaka, Japan. His father and father’s father were local bigwigs and knew all the places with no signs or misleading signs, where pleasures awaited within. Chef Kaz is paying homage to those traditions.

It’s very American in that Oyama gets a second, and then a third, act. And that he chisels out his own path. Yet this is an unmistakably Japanese enterprise.
Chef Kaz is an American entrepreneur in the tradition of so many immigrants. He works hard and is talented. Still, his culinary approach is quintessentially Japanese: quietly elegant, attendant to detail, steeped in history. More than anything, he feels like an only-in-L.A. kind of chef.

At the same time Totoraku fits into a Japanese ideal of sorts. Can you talk a little about that?
So much of Japanese language and culture is based on the sentiment of hidden beauty. Even with Japanese as a written language, it’s the spaces in between characters that give meaning. Likewise, we often find hidden rooms and gardens in Japanese restaurants and other public places. The secret quality creates almost a sacred element.

What helped you connect those dots?
Speaking to Hirokazu Kosaka, artistic director of the Japanese American Cultural & Community Center in Los Angeles really opened my eyes. As he says, “The most important ceremonies, like tea ceremonies, often take place in a location we call the engawa—the veranda—that is neither interior nor exterior, neither public nor private. There’s fascination in the buffer zone. Spaces like these hint at a hidden dimension.”

OK, describing your meal there, you write about beef throat sashimi and beef carpaccio and steak tartare with raw quail egg—a lot of uncooked stuff. Given that we’re in a new era of foodborne illness, what made you confident eating so much raw stuff?
I guess you’re always taking a chance, but, you know, you read the reviews and don’t hear about anyone getting sick; you see how meticulous Chef Kaz and his team are about preparing the meat, and it looks fresh. It’s all part of the adventure.

How many courses were there?
I lost track after ten. But somewhere just north of there.

And is it, like, a marathon of flesh?
What’s interesting is that each course felt distinct. It’s not like the all-you-can-eat bar at Sizzler. The flavors and textures and presentation made every dish a new and necessary experience.

Which was your favorite dish?
The only time I’ve asked for seconds there was to have another round of beef tongue to grill. It’s that good.  I also loved the momotaro tomatoes.

You’ve written about food a fair amount in your career. I’m not necessarily asking you to rank this meal, but where would you place it on the spectrum of experiences?
Having dined at Noma and El Bulli as well as a few of the famous underground restaurants, I can safely say that Totoraku offers one of the most interesting meals in the world. Not necessarily because it’s innovative or trendsetting—it’s neither—but because of the overall experience combined with extraordinary beef.

While the story covers all the important details, material you’ve written is bound to wind up on the proverbial cutting-room floor. What’s something you took away from the meal that we might not know from the story—something that even I didn’t see as the editor?
I was really nervous going in the first time. Chef Kaz didn’t know me, and I really wanted to tell his story. I didn’t pull strings as a journalist and didn’t announce it to him until a few days after my meal. It felt almost like an undercover operation, and I was thrilled to see what a first-class experience it was even without his knowing he was going to be my subject.

As a free-range writer, you cover all manner of topics, from celebrity profiles to travel pieces to confessionals about food. Would you consider this article a food story, or is it something else?
I think of this as a profile of a one-of-a-kind Angeleno.

Kaz is an affable fellow, but he has mixed feelings about being the focal point of the story. Do you think this piece will change things for him at all?
Not really. It’s not going to make it any easier for people to get in. He was going to be booked every night either way. And he was already the happiest chef in the city.

Will it change things for you? Now that you figured out the key to getting into the place, will you be going back?
At $140 a person, I’m going to wait for a special occasion. But, man, do I crave me some secret beef right now.

The Zen Master of Beef