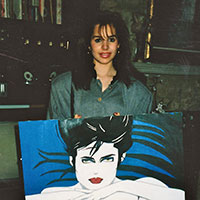 Longing for a hit of Patrick Nagel nostalgia? No need to dig up your copy of Duran Duran’s Rio. An untitled 1982 portrait by the deceased L.A. artist, whose work graced the band’s LP and whose depictions of Regan-era glamazons went seriously mainstream in the ‘80s, can be seen on the cover of Los Angeles magazine’s July edition, a special issue about the decade that changed L.A. hitting newsstands this week.

It isn’t the only place Nagel’s inspiration lives on. The pieces above, painted by Vintage Los Angeles founder and Los Angeles magazine contributor Alison Martino during her childhood, still hang in the L.A. home where she grew up. Martino’s mother Judi snapped these shots, then we pleaded with Alison, who writes about the heyday of Melrose Ave. and the Rainbow Bar & Grill in our ‘80s issue, to let us share them online. Here’s what we got her to spill:

“I painted these back in 1982. I was 12 years old. I was totally inspired by Patrick Nagel after purchasing the Duran Duran Rio LP at Tower Records. I wore it out! I was so captivated by the cover that I wanted to learn everything about the artist. Patrick Nagel had become a phenomenon and there was a gallery in Westwood that carried his work. I wanted one so badly but couldn’t afford it, so I purchased his book of prints. That way I could enjoy all of them. Then I decided to get a few canvases at Aaron Bros. and started to paint my own so I could decorate my walls with them! I was so obsessed I painted as many as I could. My mother held on to these. I still worship Nagel’s work to this day.”

For more on life in L.A. during the ’80s, pick up a copy of our July issue on newsstands this week or subscribe now.