Home Uncategorized Murder in Black and White: A Q&A with Writer Steven Mikulan About... 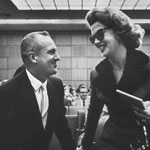 This is a murder story, but murder is only part of a larger picture. The piece is also about another Los Angeles, really—back when the region was a lot more Midwestern and wall-to-wall media coverage was still a novelty. What stands out most as you think back to your reporting for this story?
I was struck by how much people in Southern California stay put in their communities. Years ago I moved to L.A. under the impression that everyone in the area is a rootless tumbleweed ready to blow elsewhere at a moment’s notice. Yet I’ve discovered a bedrock desire of people, from West Covina to San Pedro, to live and die in the towns they grew up in. Or perhaps make that, to live and murder in the towns they grew up in. Then, too, I discovered what important recorders of middle-class life small-town newspapers once were. By reading the archived Covina Argus Citizen I could follow details of Dr. Finch’s life from the time he was a toddler onward. He seemed to have won many contests—word-game prizes, popularity contests, tennis tournaments. By reading the society columns, for example, one sees the names of people who would later play important roles in his life—as fellow physicians or as malpractice litigants. Then again, it was startling to find display ads for the Covina Ku Klux Klan.

Speaking of the press… Anna Nicole Smith, ex-cop Stephanie Lazarus, B-starlet and eventual mummy Yvette Vickers—this isn’t the first piece you’ve written for Los Angeles magazine that has involved a media circus. Do you think much has changed in the way courtroom drama is presented for mass consumption?
Of course today there’s a greater sensitivity on the part of reporters and the court system for crime victims, but also for trial witnesses and jurors. Back then the names and addresses of jurors were printed in newspapers, and Marie-Anne Lidholm—

She was the au pair Finch assaulted before killing his wife—
Right. She complained to me that the court never offered to find her an interpreter, even though Swedish was her first language and she struggled with her English on the witness stand. Yet in the trial of Anna Nicole Smith’s associates, the Superior Court had on call a Creole-French speaker to translate the testimony of a Haitian national, and no one blinked an eye. But as far as the media are concerned, reporters may seem more civilized, but they are still looking for the pornography—literal or metaphoric—lurking in the background of every sensational case.

Of course you’ve done plenty of court coverage yourself.
For me court trials are the simplest, most concentrated form of the human stuff that most interests us: People in Trouble. It’s easy to jeer a criminal defendant if you follow their progress on television through the news or Nancy Grace, but it’s nearly impossible to do that when you attend a trial in person. Part of you cannot help but wonder if an individual who is facing the complete loss of his freedom is innocent—no matter how heinous the crime he’s accused of. My early interest in court arose as a theater critic writing for the L.A. Weekly. I was struck not so much by the drama of trials—most are crushingly boring—but the innate theatrics of their participants. Everyone from the judge to the defendant to the bailiff has a role to play, and if you place those roles in the context of theater, the experience of trial-watching transcends mere voyeurism. This is hardly an original perception, but it’s amazing how unaware trial participants are of their own theatricality.

And what have you observed about the confluence of media and jurisprudence?
There was a time when a gossip columnist/trial reporter like Dorothy Kilgallen could sit with a judge in his chambers and chat about an ongoing trial. Today everyone in the justice system seems much more wary of the media. Some judges in particular view reporters as personal adversaries and expect them to be grateful for being allowed to witness a trial, rather than understand that writers are performing an important role in a democracy.

Putting aside the legal language, what do you think is most difficult to translate from firsthand courtroom experience?
Perhaps conveying detailed forensic evidence, because you have an impulse to describe the literal “bang” of a crime, but its laboratory evidence also needs to be explained in terms that the reader can visualize yet not become overwhelmed by. And when you’re describing the hydraulics of death—blood misting, spatter patterns, agonal gasps—it’s easy to either gloss over or get too wrapped up in the gory details.

We’re running some of the vintage photos on the Web site—images we couldn’t fit into the magazine. It’s pretty amazing how composed the defendants look. It was a more mannered time, of course, but what goes through your mind when you see how composed and seemingly staged everyone looks?
There’s no question that people looked cooler back then—but they always do. Yet I would argue that the formality of dress and of speech truly do make the dramatis personae in this story more compelling to modern audiences than today’s schlubby defendants, witnesses, and jurors in their baggy tracksuits, torn tennis shoes, and shapeless hair. I must say, that’s another reason I enjoy going to court (as a reporter, anyway)—to watch well-dressed lawyers converse in concise English and display perfect manners, however insincere they might be.

What stands out about images from the Finch case is that what you most notice are the unguarded moments, when someone is not in period pose but whose spur-of-the-moment gesture or slightly unkempt appearance makes them appear “modern.” But they usually appear the opposite of this. So many of the case’s images, especially the trial’s, were posed—some can be seen on Gary Cliser’s blog about the murder. There’s one in particular, where Carole Tregoff is handcuffed and appears to be sobbing her heart out in the staged pose of a Pre-Raphaelite beauty. In this one picture she can seem as corny as a silent film character or as classical as Andromeda chained to her rock.

Speaking of composed, there’s Jimmy Pappa—the former bodybuilder who was married to Carole Tregoff when she wound up falling for Bernie Finch. He could have been a story all by himself. He’s quite a character.
I could have filled the magazine with Jimmy Pappa. About how he won a $10,000 settlement from Dr. Finch for bungling Pappa’s knee operation, and how Pappa used the money to buy the Gigolo cocktail lounge on Colorado Boulevard in Pasadena. One day a woman entered the bar who was too young to drink and Pappa threw her out—but not before getting her phone number. He later married her, and she became the love of his life. Then when he visits Carole Tregoff in prison and tells her he’s gotten the girl pregnant, Tregoff blithely advises him to tell the kid to get an abortion.

Here was a blue-collar guy caught up by marriage in a supernova crime story about sex, money, and privilege. He had a brush with fame and then left the spotlight forever—he owned and lost a bar, moved with his wife to Las Vegas, and spent the rest of his life designing and operating bingo parlors. He said he managed the biggest bingo game in the country at the Aladdin Hotel, which had a $100,000 purse.

Spoiler alert: Bernard Finch did wind up going to jail. And then getting out. He found religion in his later years, didn’t he?
I can’t figure out how sincere he was. Hey, look at Charles Coulson—his conversion was real. Finch reportedly worked for a prison chaplain and just before his parole was recruited by a Catholic priest and another minister from El Dorado, Missouri, who wanted him to practice medicine in their doctor-starved town. There were reports of him attending Mass, but again, I don’t know if this was a heartfelt impulse or if he only used it for protective covering.

You write about how the case still resonates with older people in the Covina area—and how there’s a resurgence in interest in the case among photo collectors. I get the former, but who’s collecting the images and why?
Maybe collecting photos involving obscure murders is like trading in futures. All it would take is a hit film based on Dr. Finch and those black-and-white photos could turn into 8×10 gold.

I don’t suppose the enthusiasts will cross over into stalkerazzi territory, even though Carole Tregoff is still around.
I wouldn’t suspect her home will become a Grave Line Tours stop anytime soon.

To read “Murder in Black and White,” pick up a copy of the April issue on newsstands or subscribe NOW.