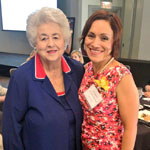 The kudos circulated along with Nescafe coffee when Los Angeles magazine held a luncheon at the Sofitel Los Angeles today to celebrate the 10 women named L.A. Game Changers in our September issue.

“Pathways of change that lead to the betterment of the city don’t pave themselves or come to be overnight,” said Dr. Funk, who also spoke at the event. “You [Game Changers] will leave this city and the world a better place for having been here.” Wyman expressed her take on the honorees this way: “They are really, really incredible.”