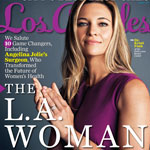 In Los Angeles magazine’s September issue, Dr. Kristi Funk, the surgeon who performed Angelina Jolie’s double mastectomy, talks for the first time about Jolie’s resolve to help others and about the impact her decision to go public had on women around the world. Funk’s Beverly Hills clinic, Pink Lotus Breast Center, has made advocating for women’s health a primary focus. In the wide-ranging interview with editor-in-chief Mary Melton, Funk talks about BRCA1, the genetic mutation that greatly increased Jolie’s chances of developing breast and ovarian cancer. Other topics include faith, fear, and getting every woman the care she deserves.

Below, a few excerpts:

Dr. Funk on if it was always clear that Jolie, as her patient, would plan to make her surgery public:
She waited to find the perfect timing in her personal and professional life, but I think most importantly in her soul. She is intensely private, but she calculated the moment when she would be ready to reveal something so personal. She knew always that in her philanthropic core she couldn’t keep this a secret and be who she is. She always knew.

Dr. Funk on whether it was intimidating to perform the surgery, knowing that the results would be so publicly scrutinized:
Treating Angelina forced my mind into a creative mode. I thought through every possible thing that I could do to improve outcomes and developed some beautiful, helpful changes to both the surgery and the preparations.

Dr. Funk on how important it has been for public awareness about the BRCA genetic mutation to have a famous person like Angelina Jolie speak out about her experience:
It’s indispensable because it’s simply easier for people to listen to someone whom they adore and trust, and that’s who celebrities are. While they have no idea who you are, they are somehow friends of yours. So it was your friend Angelina who expanded your understanding of what breast cancer is or could be. You had no idea until she said it that there was a gene out there that could be tested through your blood or saliva.

Her humanitarianism and philanthropy are unparalleled in the celebrity world. Not to mention that she’s just extraordinarily beautiful. So when someone who inspires that degree of admiration—someone who’s taken seriously and is also a tremendous beauty, arguably the most beautiful woman in the world—removes the part of her body that, as we’ve discussed, is symbolic of femininity and sexuality, you have to say, “Why would she do that?”

Dr. Funk on why women who have received diagnoses of breast cancer often jump to worst-case scenarios:
The stories about breast cancer that are most poignant, shocking, and newsworthy tend to end badly. So women’s minds go to the most recent thing they’ve heard, which maybe is Elizabeth Edwards. But she’s not the norm. Stage 0, 1, and 2 cancers are very curable, and Stage 3 is curable, too, but takes a lot more treatment because it can become Stage 4. Everything but 4 is curable.

Dr. Funk on how breasts figure in to women’s identities:
It takes a strong sense of self, which we hope women strive to achieve, to say, “I am not my breasts,” because breasts are symbolic. If you want to say otherwise, you’re in denial. Also, it is much more devastating to have something external altered unwillingly. People don’t say, “Can you just take a little less of my colon? How much of my colon are you taking? What will it look like?” You don’t have those conversations about colons. I have them all day long about breasts.

Dr. Funk on the silver lining that can come with surviving breast cancer:
So many men and women emerge stronger from this disease. It can alter their sense of self or even their career path or their relationships for the better. For many it took something as loud as cancer for them to listen. Many women will say, “I don’t regret having gone through that. I’m better having walked through the fire.” They surprise themselves with their resilience. It’s almost like they fall in love with themselves for having endured something so threatening and then emerged victorious from it.

For more from the September issue of Los Angeles magazine, pick up a copy (on newsstands August 20) or subscribe.

What Los Angeles Is Saying About Russia’s Invasion of Ukraine