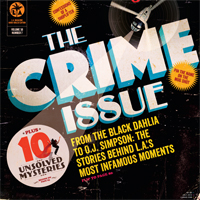 What makes a Monday more than a Monday? Finding out your work has been selected as one of the American Society of Magazine Editor’s Best Covers Contest Reader’s Choice Award nominees—and in such esteemed company as Wired, Time, Vogue, The Atlantic, The New Yorker, Esquire, Fast Company, and more.

“Coming up with the idea of turning the cover into an old school detective paperback was the perfect opportunity to collaborate with typographer Sean MacCabe and illustrator Bryan Christie,” says Banks of the noir-inspired final product. “It was challenging to create something that had a clever visual wink and at the same time wasn’t off-putting based on the subject matter.” His favorite detail? It’s hovering just below the magazine’s logo:  “Adding the helicopter gave it the specific LA detail it needed.”

You can vote for our cover and see the full list of nominees in this gallery posted by ASME at Facebook today.