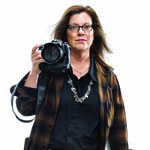 In the March issue we highlight one of Hollywood’s more important (but lesser recognized) lines of employment: location scouting. For the past 25 years, Lori Balton has been on the lookout for interesting L.A. locations, capturing a variety of spots in her Nikon lens in the hopes they’ll be used on the silver screen (some of her choices were used in films like Seabiscuit, Inception, and There Will Be Blood). Decrepit or luxe, Old World or new age, she shares some of the places she’s snapped while on the job in the slideshow below. If you recognize one from your favorite film, don’t forget to leave a comment letting us know!

Scene It Before: Hotel Cortez from American Horror Story: Hotel

Scene It Before: The Palace Theatre from Scandal