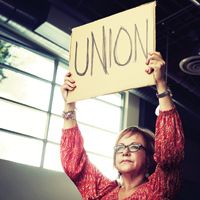 In the December issue of Los Angeles, writer Hillel Aron profiles labor leader María Elena Durazo. Regardless of what your relationship to unionized labor is, she’s someone whose impact on the city has been massive. Executive editor Matthew Segal talks with Aron about reporting the story and about L.A. politics.

You wrote about the last mayor’s race and have reported extensively on the Los Angeles Unified School District, which is inextricably tied to politics in this city. Thing is, local politics just don’t enjoy the sort traction they do in, say, Dallas or New York City. Any theories?
Dallas? Really? That’s interesting. But yeah, voters in L.A. aren’t really engaged in local politics. They barely vote, and it’s certainly not something they discuss at dinner or whatever. I think that’s partly a function of how the electoral system is set up. Raphael Sonenshein—

The poli-sci professor at Fullerton who essentially wrote the book on L.A. politics.
Right. He talks about this a lot, about how our system was set up to be nonpartisan, sort of as a response to the machine politics on the East Coast—which, on the one hand, led to all sorts of corruption and patronage appointments, but also led to everyone being politically organized, block by block.

So in L.A. we never had that, never had the history of that kind of political organization. Parties never really had an incentive to organize large groups of people like they did in Chicago and New York. In fact, you could argue that unions were one of the few organizations that have that incentive in Los Angeles. So politicians in L.A. tend to have to put together geographic and ethnic coalitions.

The other thing is that L.A. is just so frigging big. And I think when people think about the issues affecting them, they don’t see them as citywide issues; they see them as either neighborhood issues or nationwide issues.

As for María Elena Durazo, she’s not technically a politician. She’s a labor leader. How much division do you see between the two in a heavily Democratic place like L.A.?
Hmmm…well, unions get what they want—most of the time, anyway. They’re an interest group, certainly. And there’s internal union politics. Does that answer your question?

Well, to cut right to it, I’m thinking of Durazo’s late husband, Miguel Contreras. He is credited with linking the labor movement and Latinos, in the process transforming California into a solidly blue state. You write about it, but how would you sum up the strategy he used?
Yeah, so at the time there were all these Hispanic immigrants, but they weren’t voting. Miguel and María Elena, they start organizing Hispanic service workers into unions, but they also start registering Hispanic voters, and during elections, using union workers to run voter outreach campaigns in Hispanic neighborhoods. It caused this huge shift in L.A., and L.A. has so many people, it really tilted things in California as well.

For those reasons, Contreras is revered by those in labor and government—at least, those whom he was allied with. But he was also able to cultivate friendships with folks like Republican mayor Richard Riordan. Durazo is regarded somewhat warily by those with whom she butts heads. And yet as you note in the piece, she can be charming. I was surprised at just how lighthearted she proved to be. She even shimmies a little in front of you. Do you think that’s who she is? Or is any of it to counteract what adversaries, if you will, characterize as some serious intensity?
Yeah, that’s definitely who she is. Everyone talks about how fun she is to be around. She’s very much a social person—charming, fun, a good conversationalist. I think that’s certainly helped to consolidate her power: People genuinely like her, especially her membership, and other labor leaders. They love her.

It’s hard not to recall Norma Rae, which is something we riff on in the opening photo of the story. She’s the child of farm workers. She’s been fighting for labor her entire career. Does she have much of a stance on the push for pension reform among public employees?
You know, I’ve never seen Norma Rae. Is it good? Should I? For some reason I never really liked Sally Field. I’m not sure why.

There goes my Smokey and the Bandit question.
I haven’t heard her say much about pension reform. I’m sure she’s opposed to anything that reduces benefits. But it’s not a focus of hers. She used to represent hotel workers, so if she has any favorites, her heart is still with them. But she’s had to represent a broad coalition of unions, and she doesn’t get too sucked into the private employee versus public employee fight. She tries to put them all in the same boat.

This feature originally began as something about half the size of what we ended up with, because Durazo’s story is such a big part of modern L.A. She must certainly see her place in the region’s history. But do you get the sense that she’s mindful of her place as a woman in history? Is she focused much on gender?
Doesn’t seem like it. In fact, I heard someone criticize her for the lack of women on City Council (there’s only one—Nury Martinez). You’ll recall that sit-down I write about in the story, the one she held between Richard Alarcón, Felipe Fuentes, and Cindy Montañez. Three candidates, two seats. Well, guess who didn’t get a seat? Montañez. Now, maybe it was like a seniority thing; maybe it wasn’t. But women get left out a lot, and some people say it’s because of the power brokers that so often swing these low-turnout, low-media-coverage elections. That said, the County Fed—

Which Durazo heads.
Right. The Fed did endorse Wendy Greuel, but that had little to do with her being a woman.

Now, in the story, you note Contreras’s more than occasional marital infidelity. Not a new story in politics, and no secret among those who knew him. And yet, it’s something that has never been reported before. Why, if it’s such a widely known side of Contreras, do you think no one has spoken out?
It’s pretty crazy that no one has reported it. Have you heard that Adam Smith quote? Something about when people of the same trade meet together, it ends in a conspiracy against the public. That quote comes to mind. I think initially, after he died, there was a movement to lionize the guy. María Elena got the LAUSD Board of Education to name a school after Miguel—the school that was built on the site of the HERE headquarters, which is where they met. And then he sort of faded from memory. Not much is really written about him anymore. I think if someone writes a book about him—and someone really should—maybe then it would come out.

So fear, respect, and maybe concern about what people might think of as tarnishing a hero?
Yeah, maybe. Are reporters scared of pissing off María Elena? Maybe. Maybe there’s sort of a taboo against reporting about people’s sex lives. Personally, I never understood that.

Well, I don’t know about any taboo. Maybe the stories of infidelity tend to begin with oppo researchers floating rumors to reporters. Granted, sometimes the reporting on such indiscretions is gratuitous and aimed solely at sensationalism. And in fact, Durazo initially didn’t want to comment, saying the point wasn’t relevant to her profile. What’s your counterargument?
There are a lot of reasons, but to be perfectly honest, the one true reason, for me, is that it’s interesting. Nonfiction writing, for me, is storytelling. I like writing about interesting things—the weird stuff, the gray area, the contradictions. I mean, aren’t these people so much more interesting when you see their flaws and weaknesses and vulnerabilities? It gets back to the earlier point about how no one cares about local politics. You know, the New York mayor’s race was, like, 100 times more fun to read about than the L.A. mayor’s race. Why? Cause you had Anthony Weiner running around like a crazy person. You had Bill de Blasio with his multiracial family running essentially against Michael Bloomberg, who’s this incredibly weird gazillionaire. All these personalities. Who even cared what the issues were? Of course that doesn’t mean that all journalists should go be gossip columnists. But these hugely influential people—we shouldn’t whitewash them. We should see all of their sides. I know not everyone agrees with that. And it’s not something I’m entirely certain of, either. But I lean toward that way of thinking. Eventually María Elena did give us a brief comment about it, which I thought was really brave. To my knowledge, it’s the first time she’s ever said anything about it.

I guess one could point to Hillary Clinton as a parallel. Speaking of which, why do you think Durazo has chosen to stay local? She’s in her third term now and has certainly been encouraged to assume a national leadership position in the AFL-CIO.
Yeah, there was a rumor going around that María Elena was going to quit and run as the number two at the AFL-CIO. But that ended up not being true. First of all, number two at the AFL-CIO would be something of a demotion. And it’s not like she would take on Richard Trumka, the current head. Would she take the number one spot? Maybe. That might be hard to pass up. But she’s very much a California person. That’s where her friends and allies and most of her work has been. That would be a hard move to make. And the head of the LA County Fed is great job—you can really throw your weight around. I heard that heads of labor councils in other places look at L.A. with a kind of wide-eyed admiration. Like, “Wow, L.A.—labor really runs the show down there. And such great weather, too!”

What about her changed in your eyes as you began reporting the story, spending time with her and speaking with her allies and foes?
I was most surprised by her charming side. I’d heard all about her scary side, the dragon lady stuff. But she’s hilarious. And just really easy to talk with. Super friendly. I think she’s just really adept socially—unlike most politicians, who can be strange. I mean Garcetti is real charming but a lot of them are just so socially awkward, it’s amazing they got elected to anything. But María Elena, she’s just a genuinely friendly person, curious about other people. Funny. And very quick.

To read “The Wage Warrior,” Hillel Aron’s profile of María Elena Durazo, pick up a copy of our December issue on newsstands or subscribe NOW.