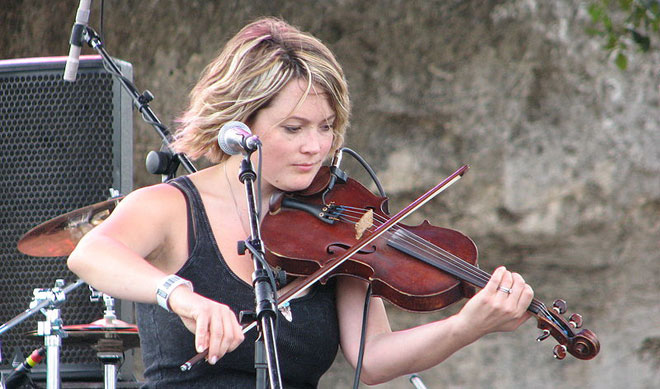 This month we run a small Q&A with Sara Watkins, who will be performing at McCabe’s Guitar Shop on May 10.  The local musician started performing with the progressive bluegrass group Nickel Creek (with brother Sean and Chris Thile, currently of the Punch Brothers) at the ripe old age of eight. While primarily known as a singer and fiddle player, she also plays guitar and ukulele and has played percussion while touring with The Decemberists.

Me? I saw Nickel Creek for the first time at the Austin City Limits music festival in 2003. I was impressed with their sound but a little far away, so I borrowed a friend’s binoculars to see their faces and was stunned by the group’s youth. I remember exclaiming, “Those are children up there playing those instruments!”

If Sara is new to you and you’d like to get familiar with her sound before Friday night’s show, here’s where to start:

Nickel Creek
Even though the band put out two earlier albums, this was considered their big debut. It was produced by bluegrass sweetheart Allison Krauss and garnered the band a Grammy nomination.

This Side
This album, also produced by Allison Krauss, won a Grammy Award for Best Contemporary Folk Album.

Reasons Why: The Very Best
No, it doesn’t count as cheating. If you just want to keep things simple, here are the band’s greatest hits all in one place.

Sara Watkins
Produced by John Paul Jones, the bass player in Led Zeppelin, standouts on this release are the plaintive beauty of “All This Time,” and the toe-tapping, working class storytelling of “Long Hot Summer Days.”

Sun Midnight Sun
My favorites on this release produced by young guitar wizard Blake Mills are the country crooning of “Be There,” the pointed lament to a lover, “When it Pleases You,” and “You’re the One I Love,” featuring Fiona Apple.

We are especially lucky in Los Angeles because for years Sara and her brother Sean have hosted “The Watkins Family Hour” at Largo at the Coronet. (Check their calendar listings for the next event). It’s always an entertaining night of music because you just don’t know which old friend or longtime musical hero might show up—maybe Jackson Browne, Fiona Apple, Tom Petty and the Heartbreakers keyboardist Benmont Tench, Elvis Costello drummer Pete Thomas, alt-country duo Gillian Welch and Dave Rawlings, or colleagues from the bluegrass world. I caught an unforgettable night that saw John Paul Jones playing “Going to California” on mandolin, backed by Greg Leisz, Gabe Wicher, Jon Brion, and Jim Keltner.