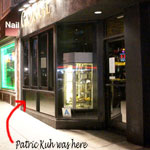 When Andrea Bricco photographed the interior of Gorge restaurant on assignment for our February issue, she ended up capturing more than we had hoped for: she inadvertently snapped an image of our restaurant critic, Patric Kuh, dining at the Gallic restaurant. We immediately nixed the photo—it’s policy to keep a reviewer’s identity under wraps—then asked Bricco how she managed to get Kuh on film (something many restaurateurs would love to see). “There were only two tables in the place that night and I knew the other table were family members of the chef,” she recalls. “I remember asking Patric and the woman he was with if I could take their photo. He said yes, but then after I came back from the kitchen I realized that he and the woman had switched places. I just thought that he must not have wanted to be front and center in the photos. He sure didn’t give anything away!”

Inside the L.A. Chef After Party