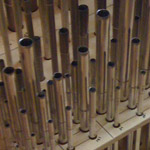 When I was assigned to report a “How L.A. Works” article for our December issue on the Walt Disney Concert Hall’s organ—the $3 million, 40-ton, multi-pipe instrument that has transfixed me each and every time I’ve had the pleasure of being in the music center—I knew I’d be heading straight to the source. What I didn’t know is that I’d end up inside it.

I met Philip Allen Smith, the organ conservator for the Los Angeles Philharmonic, at Walt Disney Concert Hall on a weekday morning, when the space was empty save for security guards and a few tourists peering about. Smith walked me onto the stage, where the organ’s portable console, a near-identical reproduction of the instrument’s main console (that one sits at the base of the organ’s case), was set up. Looking over the machine—a piano desk-like structure with enough keys, pedals, and stops to overwhelm an octopus—we talked about how each of the instrument’s many components work. It’s a complicated piece of equipment, one that few musicians master, and I was struck by how beautiful such intricate machinery could be.

From the stage Smith and I headed to a small room behind the organ’s casing, which is where the instrument’s blowers are kept. About the size of a janitor’s closet, the room was cool and trinket-less, save for a cutout of Cinderella that hung on the wall (a nod to Walt Disney, I was told). A small door opened into the pipe chambers, and with just a few steps we were inside the guts of the organ. All wood and pipes, the instrument’s interior looks like a plumbing-heavy construction area, a home in the making with beams in place but no walls. Like the console and the organ’s iconic facade, the pipe chambers are stunning. I slid off my heels so I could maneuver through small spaces and snap some pics, which are above.

Before too much longer I’d filled my pad with notes, my shoes were back on, and I was in the car on my way back to the office. It’s been two months since I filed my story on the organ, but I recall what it felt like to stand inside it perfectly. It’s easy to remember awe.

Listen to the inaugural program performed by Frederick Swann at the first public recital of the Walt Disney Concert Hall organ: