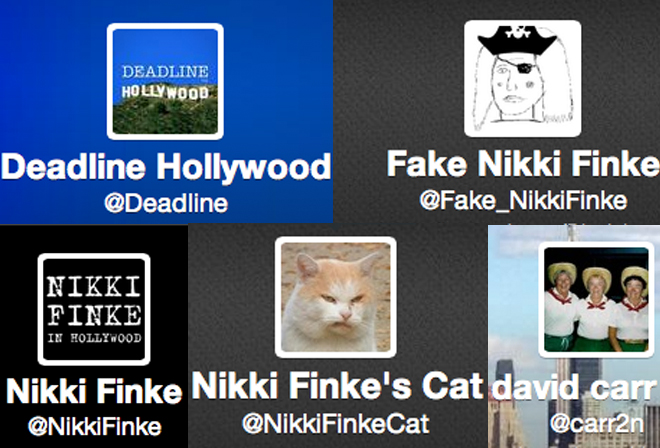 In Los Angeles magazine’s December issue, “Pulp Friction,” Patrick Goldstein’s piece on the rock-‘em sock-‘em behavior of the four Hollywood “trades” captured as never before what drives the folks at Deadline, The Hollywood Reporter, The Wrap, and Variety to win at all costs. Even as the story was headed to the printer, however, one particular skirmish was being fought in public. That would be the battle between Deadline founder Nikki Finke and Jay Penske, whose Penske Media Corp. owns Deadline and Variety. Read on for a chronology.

Penske makes it official: With no advance warning, he pulled the Deadline news feed from my Twitter account. I have “too many followers”.

I am building out http://t.co/8vaMwz16aD and will unveil it right after the new year. Can’t wait to report the real truth about Hollywood.

All that’s left is for the lawyers to disentangle me from Penske. I have no idea why he has fought so hard to keep me. I’ll be free soon.

Finke claims to have been locked out of Deadline.

Penske keeps sending me legal letters since I began giving interviews. Latest one this am demands I remove and retract my tweets.

Finke doesn’t confine herself to the Twittersphere. She posts the news on the Deadline site itself (begging the question: If you’re locked out, then how are you posting?). Although the original post has been scrubbed, NYmag.com’s Vulture ran this excerpt in a post entitled “Nikke Finke Continues to Rant About Deadline, Now On Deadline:”

I have been locked out of the Deadline Hollywood site after founding it 7 1/2 years ago. So don’t expect any more box office. I also just tried to post an exclusive involving Jeff Robinov and Sony Pictures and GK Films’ Graham King and Dune Capital Management Steve Mnuchin but only the alert went through. What an extremely sad day.

I have been locked out of the Deadline Hollywood website which I founded 7 1/2 years ago. Jay Penske gave the order. Not even the staff knew

So don’t expect any more box office from me. I also just tried to post an exclusive involving Jeff Robinov and Sony Pictures but couldn’t.

I now only have very limited access inside the Deadline website’s admin after 7 1/2 years of full access. What a very sad day.

For weeks now Jay Penske pledged to me he would wage ‘nuclear war’ on me unless I obeyed him and stayed at Deadline. He started it Wednesday

I actually had to go to the Deadline website home page and see if I was still listed as Editor in Chief and Founder.

Interesting. I am no longer locked out of Deadline and my stories no longer going to Trash. I assume Penske now wants clean hands.

At 5:28 p.m., a fed-up sounding Mike Fleming—Finke’s colleague—posts at Deadline:

…let me make it clear, that Nikki has not been locked out of the site. If she had been, if would’ve been difficult for her to post that she was locked out of the site. That said, Nikki has been restricted to filing and editing her own stories. Secondly, she has complained she is prevented from running Deadline stories on her personal Twitter feed, because she has too many followers. The truth is, she has built a Twitter following with a site that gives the appearance she writes every story on Deadline, when her output continues to diminish. That traffic belongs to Deadline’s Twitter feed. The reason for this and other changes is simple. We are trying to strip away the distractions and diversions that have gotten between her doing what she does best, which is filing provocative copy like the Jeff Robinov scoop earlier today….

The evolving media story is picked up by Defamer.

Penske parent company now deleting comments to my stories. At least 93 comments in support of me have suddenly disappeared in minutes.

In 2011, HBO passed on a drama w/ Diane Keaton about a Nikki Finke-like blogger. Moment of silence for how much fun season 3 would’ve been.

@carr2n – You of all people tweet that about me? Thankfully I’ll never be you whose book said you were a coke-dealing thug who beat up women

Carr, who wrote a 2008 memoir that owns up to such behavior (The Night of the Gun: A Reporter Investigates the Darkest Story of his Life – His Own), immediately retweets Finke.

And that’s not the only feud-ette Finke engages in. Here’s what happens when the head writer for The Daily Show attempts a bit of humor:

I snapped this picture of salary negotiations between Nikki Finke and Jay Penske. http://t.co/3fhcMUeaGu Several ‘new’ showbiz news feeds coming to this Twitter account. Very grateful for all the many offers. Stay tuned.

Like moths to a flame, they come… Best-selling funny woman Kelly Oxford jumps in next, addressing Finke directly:

@kellyoxford – Nope. Besides, I could never be as cool as Carrie in ‘Homeland’.

It’s funny to watch @NikkiFinke tweet and then RT the same @Deadline articles. It’s like she’s sticking Mike Fleming with a pin.

The sparks keep flying. Finke and Penske head for mediation, which consists of them sitting in separate rooms, communicating through intermediaries. And then, finally, comes this:

Jay Penske has just told me I am free to leave. He tried to buy my silence. No sale.

Let me be clear: I have NO non-compete and NO confidentiality with Penske. Anyone claiming that hasn’t read my contracts.

The hilarity just keeps coming, as Deadline announces that Funny or Die is making a spoof video.

Ahem. Penske isn’t done yet, either. And he says Finke does indeed have a non-compete. Welcome to arbitration!

Los Angeles magazine posts its story. Immediately, readers pick up on some of the most important revelations in the piece, including Finke’s status as a former pet owner.

…and so, of course, is the cat’s former owner. Which brings us full circle:

Patrick Goldstein failed to accurately characterize me, my journalism, and what I’ve accomplished. Instead, he trivialized all. Ignore.

Finke metes out the harshest of punishments: Goldstein and his editor, Amy Wallace, are blocked from following her on Twitter. But that’s okay. There’s always Fake Nikki Finke.

I know I shouldn’t get frustrated that others do not share my steadfast commitment to quality journalism, but I can’t help it.