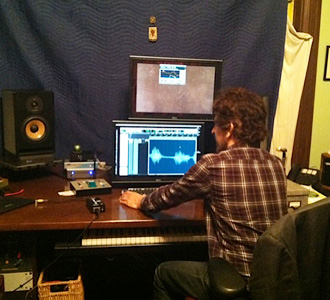 Hang-up phone calls to his victims were a big part of the Golden State Killer’s m.o. Police believe he got victims’ numbers from burglarizing or casing their homes in advance; rotary phones in the 1970s had the number printed on the front. He called both before and after attacks, perhaps to ascertain his target’s whereabouts and/or to frighten his victims with intimidating taunts.

NEW! This clip is from a Sacramento-area 911 call placed in late 1977 by an unknown male claiming to be the East Area Rapist. Investigators had intended to share this audio file along with the other new evidence published by Los Angeles magazine late last month but delayed its release so they could clean up and enhance the sound. Investigators would like toidentify the man on this tape and believe that his voice sounds similar to the “Is Ray there?” caller (below).

Sacramento detectives put a tap on one rape victim’s phone.  In January 1978, the tap recorded a terrifying, obscene phone call. As the young woman waited silently on the phone, knowing the police tap was recording, the caller breathed heavily, then whispered menacingly. “Gonna kill you,” he repeated. “Bitch,” he hissed. “Whore.”  Both the victim and the police believe the caller was the Golden State Killer.

While listening to the police tap recordings years later, investigators caught an earlier, overlooked wrong number call that piqued their interest. “Is Ray there?” a man asks quickly. Many victims reported an unusual number of wrong number calls around the time of their attacks, and because such calls are relatively uncommon, investigators believe the man’s voice, which is more identifiable than the obscene whisper call, could be the killer’s. In this edited version, the man’s voice is slightly slowed down.