Home Uncategorized Has Peter Bart Passed The “Most Hated Man In Hollywood” Baton to... 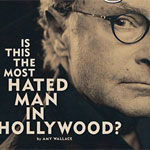 We did a double take when the April 12 issue of The Hollywood Reporter landed on our desk. On it’s cover: a black-and-white print of a middle-aged white male under the headline THE MOST HATED MAN IN HOLLYWOOD. We ran a similar cover back in September 2001 announcing a profile of Peter Bart, who was then the editor-in-chief of Variety, by Los Angeles magazine editor-at-large Amy Wallace. But that’s not Bart looking out from beneath the painted-on red devil horns on this week’s THR; it’s Dish billionaire Charlie Ergen, who is accused of “running America’s worst place to work” and owns “the technology that could destroy TV’s economic future.”

So how does the “Most Hated Man in Hollywood” of today compare to that of 2001? We look at Bart and Ergen, side by side:

Age when named Most Hated Man in Hollywood
BART: 69
ERGEN: 60

“Most Hated Man in Hollywood”-Qualifying Traits
BART: “A setter of rules who hates to follow them, a lover of labels who resents being characterized, a seeker of the truth who doesn’t always tell it, Bart believes he is immune to the conflicts that derail lesser men.”
ERGEN: Ergen was caught violating a promise made under oath to stop distantly retransmitting TV signals without a license. His DVR service the Hopper could upend the economics of broadcasting by allowing audiences to watch programming, commercial-free.

Academy-Award Worthy Show(s) of Force
BART: Bart once “emptied a wastebasket on a reporter’s head. “That was very calculated,” he says. “I knew it was the only way to get his attention.”

To writer Amy Wallace: “I’ll send you a note saying I will sue you, which I sure as hell will.”

ERGEN: Former EchoStar exec Barbara Roehrig remembers Ergen “would threaten to walk into a room and fire all the employees the ‘craziness pack.’”

Words to Live By
BART: “Don’t allow yourself to be imprisoned in any socioeconomic category, religious category, ethnic category, whatever.”
ERGEN: “We’re a little bit like an Indiana Jones movie… We’re always in trouble. We always get out of it.”