Home Uncategorized Gone Clubbing: A Q&A with Dave Gardetta About His December Profile of... 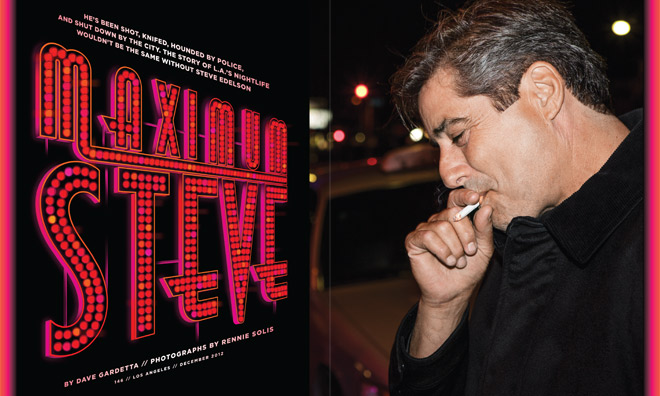 In the December issue, Los Angeles magazine writer-at-large Dave Gardetta profiles club owner Steve Edelson, who has launched more nightlife venues in the city than anybody else and has built a reputation for being brilliant and volatile. Gardetta talks with executive editor Matthew Segal about the story—and about being a storyteller.

You’ve done profiles on Brent Bolthouse, who is probably the city’s most famous club promoter, and Sam Nazarian, the fellow who created SBE, which launched a mass of hip spots, from the SLS Hotel to Hyde Lounge to spin-offs of Katsu-ya restaurant. What’s a common thread among these club guys?
While Bolthouse and Nazarian have worked together on A-list spaces in Los Angeles—Nazarian as club owner, Bolthouse as his club promoter—they appear at first to come from very different backgrounds. Bolthouse grew up on the fringes of the Mojave Desert, an adopted child in a struggling middle-class family. Nazarian, on the other hand, was born into great wealth; his father amassed $1 billion working in the construction and software industries, and the family lived in Beverly Hills. But both men were outsiders to L.A.’s club scene. Bolthouse was nearly homeless when he broke in as a DJ during the late ’80s, and Nazarian—for all his wealth—was a member of L.A.’s large Persian community, and Persians were rarely welcome at the doors of A-list clubs in the 1990s.

And how does Steve Edelson differ?
Steve has never been interested in creating A-list spaces, where inviting celebrities in is as important as keeping many of us out. He is another outsider—a Chicago transplant who had a steep learning curve when he arrived in L.A. around the same time Bolthouse was starting out. And he’s certainly as interested in building an empire rivaling Nazarian’s. But his B-list clubs have always accepted anyone who approached the door—even Nazarian would have been let in.

People sum him up as being a brilliant salesman and a man with a volcanic temper. Are they two different Edelsons, or do they exist within the same person?
Well, the temper is part of the business strategy, which he is brilliant at. Steve gets mad when he sees one of his clubs being run poorly, he gets madder when he thinks the city is stepping in on his ability to turn a dollar. Again, I don’t know how different that is from other L.A. club owners. I guess I would say that his ability to go “volcanic,” as you put it, contains a lot more heat than most people can summon. But as for his temperament and his track record for squabbling with city officials—well, he’s proud that he’s stood up against what he sees as unjust city regulations of club spaces. But he doesn’t get anything out of that deal—his antagonisms often come back to hurt him financially.

What was Edelson like when confronted with some of the anecdotes?
He’s amazingly honest about most of the stories that surround him, no matter how off-the-charts awful they first appear to be. Steve’s not defensive—he doesn’t hide who he is. He may not be proud of everything he’s done, but he always has a reason ready.

How many properties does Steve own?
Hard to say precisely. On last check, I think he said 21 properties in L.A., including clubs, apartments, and business buildings. There are seven hotels parceled out between Ojai and the Northern California town of Shasta, another 25 or so houses in Ojai that he rents out as vacation rentals, and one tangerine farm he lives on. That’s much of what we know about—there might be more that we don’t.

One woman in the story says he can be a ladies’ man. Can you see that?
A ladies’ man in the grand tradition. He’s gregarious, interested in others, bases his business on pleasing both women and men, making them feel comfortable in a strange setting—a new club. That’s his livelihood. Do that right for a quarter century, and you, too, would probably know how to manage a first date.

Why do you think he agreed to do this story?
First, every club owner wants press. On another level, he might have been seeking a sounding board for his current struggles with the city over his Silver Lake club, Los Globos.

So Los Globos is on the ropes?
It looked like it was about to be shut down by the city until just recently. Steve defeated that seizure, but the Los Globos drama changes almost every day.

Beating the second-largest city in the country in a court battle is a tall order, especially for a guy who, despite his millions, is known for spending wisely.
I think Steve’s at least as smart as his best lawyers when it comes to the labyrinth of city club regulations. I’d say he likely is half of his defense team—and you can save a lot of billing that way.

Of course, while you’ve covered a slew of topics, nightlife is one that you’ve probably returned to more than any other. Along with Bolthouse and Nazarian, you’ve written about the people who created L.A. nightlife in the ‘90s, club girls (a story that was nominated for a National Magazine Award), etc. What draws you to this topic in particular?
It’s the same thinking. In this case, this is an industry that has helped economically reform parts of the city, one most of us have spent more than a few bleary nights exploring on our own. But never, I thought, was it taken seriously as a print subject that could fuel a string of stories both interesting and enjoyable.

You’re the kind of writer who prefers to start typing by 6 a.m. Some club kids aren’t even in bed by then. Why so early and how does that play into a nightlife piece?
It means I don’t get around much anymore.