Home Uncategorized Celebrity Look-Alikes: Can You Tell These Biographers Apart From Their Subjects? 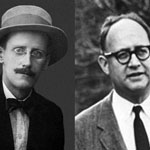 In our September issue, David Kipen provides an exclusive look at the private life of an award-winning biographer in his profile of L.A.-based author A. Scott Berg (in the print edition on newsstands now). What Kipen doesn’t cover in that story or in the interview he gave to Los Angeles magazine executive editor Matthew Segal about the feature, is one of the more intriguing phenomenons of the craft: how some biographers begin to resemble the person they are studying (kind of like how after a while, dogs start to look like their owners and vice versa). For instance, “Robert Caro looks more and more like Lyndon Johnson with each installment he writes,” said Kipen. “By the time Caro completes his study, Ladybird herself might need good lighting to tell them apart.”

Kidding aside, we did a little research and found this selection of authors who really do look like their subjects.

7 Bars in L.A. That Are Perfect for Reading Books