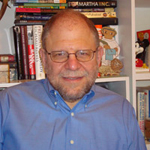 The news couldn’t have come as more of a shock: Yesterday, Mark Lacter, Los Angeles magazine’s Business columnist, died of a massive stroke. He was a mere 59. I began editing Mark’s column when he came to the magazine eight years ago. Whether he was writing about boutique banks, Hollywood production flight, the middle-class squeeze, or LAX, Mark had a singular ability to boil down complicated details into a narrative that was easy to follow and a pleasure to read.

It was a skill he’d polished over several decades as a writer and editor. Mark worked at the San Francisco Chronicle and the Los Angeles Daily News and headed the Los Angeles Business Journal for two stints—one in the ’90s, with a gig as senior editor at Forbes before returning to the Journal. Afterward, he began blogging for L.A. Observed and writing for this magazine while serving as a regular morning commentator on KPCC, the rich timbre of his voice cutting through the hiss of morning traffic as he shared his insights with show host Steve Julian. (Only several years into our friendship, Mark told me he had hosted a jazz radio program as a student in Washington, D.C.)

I could often hear his voice when I was editing his stories—the easygoing turns of phrase, the baritone chuckle. Even when he was systematically dismantling a shibboleth, Mark had a way of steering clear of rancor or cheap shots. Or pretense, because Mark hated pretense, which may be one reason why he took so little credit for the amount of effort that went into his stories—the digging, the digesting of numbers, the crafting and polishing. There was no showboating, and I’ve got no doubt that’s why his work for the magazine was recognized by the City and Regional Magazine Association as a frequent finalist for Best Magazine Column (he won in 2011) in the country. Read his work here.

Mark had been with his wife, the mystery novelist Laura Levine, since 1988. “He was the best hubby,” she said over the phone today from her Westside home. “He always made me laugh.” Me, too. We’ll all miss him very much. The man was without peer.

Paul Fortune, One of L.A.’s Legendary Interior Designers, Has Passed Away