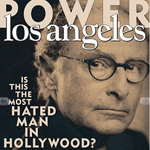 Today, Harvard’s Nieman Storyboard posted its Annotation Tuesday! feature about one of your stories for Los Angeles: your 2001 profile of the then-editor of the entertainment trade paper Variety, Peter Bart. Tell us what Annotation Tuesday! is, exactly.
The Annotation Tuesday!—which was invented by the terrific journalist Paige Williams—is such a cool thing for writers and readers, I was flattered to have one of my pieces chosen. What happens is another writer (in this case Elon Green) picks a favorite piece and embeds questions and comments throughout. Then the author of the piece goes in and answers the questions. Reporting and writing can be a somewhat solitary process, and many of us have invented our own ways of doing things that we have no idea if others share. These annotations let us peek into one another’s work habits and struggles. Every time I read one, I learn something.

What was it like to go back to the feature more than a decade later with fresh eyes?
So much has changed in the media in general and in the entertainment trade press in particular since I wrote the piece. I was interested to see how much held up in terms of our observations about Hollywood culture. From the start, I’d proposed this story as a route into the sociology of the entertainment business, and while the business models have evolved a lot since then, the inherent paranoia and amorphousness of success in this town have remained largely the same.

Variety, the paper Bart helmed when you wrote the story, has undergone some significant business changes in the last year—it was purchased by Penske Media, stopped publishing its daily edition, and has three new editors-in-chief sharing the top editorial role. What do you make of the title’s evolution?
Well, something had to give. Back when I wrote this piece, Variety was a cash cow. All the industry players paid to advertise in its pages to promote their films/TV programs, to drum up Oscar buzz, to flatter and congratulate business partners or mourn their passing. It was like a big bulletin board that you had to pay to post on—something that the Internet (and Deadline Hollywood’s comment function) has now made available for free. That shift affects everyone in print journalism, but it hit the trades particularly hard. Under Janice Min, the Hollywood Reporter has turned itself into a glossy mixture of lifestyle/aspirational fodder and news/gossip about the biz. Variety had to do something to evolve. I used to work at the Los Angeles Times with Claudia Eller, Variety’s new editor-in-chief for film coverage, and her knowledge of the business is unparalleled. I’m looking forward to seeing how she and her colleagues continue to reinvent it.

Anything else you want to share about the piece?
As I say in the Annotation, one of the most amazing reactions to our story came from Bart’s ex-wife, Dorothy (Duffie) Bart. I’ve talked about the letter she sent me over the years, and we ran an excerpt of it with her permission in Los Angeles a few months after the piece ran. I just went and dug it out of a box (note to writers: keep everything). You can read it in its entirety here: