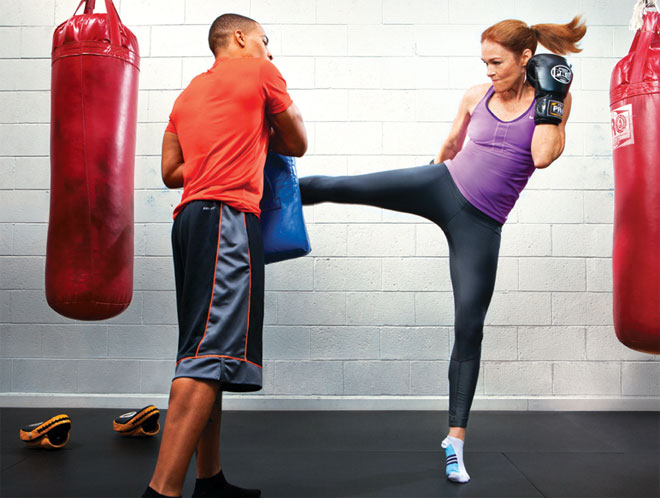 In the January issue you shed and bare it, sharing with our readers your quest to lose ten pounds by your 50th birthday. What has the response been like to the story?
Terrific. I’ve heard from a lot of people who found the piece inspiring, which makes me happy. Also, the hilarious Joel Stein sent a lovely note that said three inches off my waist was way more impressive than losing 10 pounds. He also revealed that once, when he was in his 20s, he did a piece about getting 6-pack abs in 6 weeks. Afterwards, he got set up with a woman named Cassandra who’d seen the piece. He married her. I told him if I get those kind of results, I’ll be thrilled. So far, no marriage proposals, but the year is just beginning.

It’s been six weeks since you finished the story. Are you still working out? What’s your regimen like now?
Yes, I’m still working out with Jay McLeod (and without him). I think it’s fair to say I’m hooked. I haven’t done any two-a-days since finishing the piece, but I’ve been pretty consistent about doing cardio and strength training. Jay (who has a new website, by the way) went away for two weeks around the holidays and I felt like I was in withdrawal.

It was essentially your job to work out while writing about getting in shape. Now that you’ve moved on to other assignments, is it hard to stay focused on your body?
Clearly, when you can justify getting to the office at 11 because you were “working” at the gym in the morning, it makes things a lot easier. We all know that the big enemy of being fit isn’t lack of desire, it’s lack of time. And the holidays required more food and alcohol than Jay would normally approve of, so I have a little work to do in January to get things back in control.

How do you keep from getting bored?
As I indicated in the piece, varying your workouts—whether with the help of a trainer or by summoning your own imagination—is key. If you’re bored, you won’t keep doing it, for one thing. And it’s important to use different muscles, to cross train.

What tips would you give to someone with a New Year’s Resolution to lose weight?
Get help. Not a trainer, necessarily, although obviously I love mine. Friends of mine swear by Weight Watchers, which is sensible and relatively easy to follow. Also, take the time to assemble a workout playlist you keep on your iPod. Music makes all the difference when trying to slog through 45 minutes on the elliptical.

RELATED: Read The Power Playbook for Getting Fit in L.A.

L.A. in Love: Bridal Boot Camp Is in Session

Unleash Your Fighter Spirit with the Cut by Equinox