Home Uncategorized A Sneak Peek Inside our December Issue 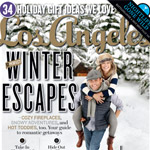 Clubbing’s never been my thing. When my teenage friends tried to cajole me into crawling out the bedroom window to crash the Odyssey disco on Beverly Boulevard, I passed, preferring to catch up with Tootie’s exploits on The Facts of Life or flip my Cabaret LP to side B. I like vodka, I like dancing, and I like music. But the combination of all three in nerve-shattering superabundance sets me reeling. Plus, if I’m going to find myself rubbing up against a drunk and sweaty stranger on a dance floor, he’d better look like Daniel Craig and move like Hugh Jackman. I am so not a club girl that even walking onto a Virgin Airlines jet, with its thumping remix soundtrack and sleek hostesslike attendants, can make me anxious.

I do admire those who have the sensory capacity to not only endure clubbing but who also get a rush from it. They populate a fascinating subculture, and magazine pieces about subcultures are among my favorite stories to read (and write). L.A. is a city rich in tribes. They may be drawn together by a counterintuitive enthusiasm (Edwardian Goths, say), or a shared commitment to an alternative way of living (hard-core bicyclists), or a centuries-old belief system (Hasids). Before I became editor of this magazine, I wrote about people obsessed with travel trailers (eventually I became one of them) and the oddball ranks of car-chase connoisseurs.

In this issue we dip into two distinctive pockets of the city, each with its own rituals: B-level nightclubs and girls’ club volleyball tournaments. Writer-at-large Dave Gardetta—who’s previously ventured into the outlier worlds of magicians, porn stars, and Disney fans—profiles Steve Edelson, who for decades has successfully appealed to the fickle tastes of clubgoers in the Hollywood/Silver Lake/Echo Park triangle; Edelson has also been involved in dozens of lawsuits and is currently fighting the city, which wants to shut down his club Los Globos. Less legally messy is the all-consuming sport of girls’ club volleyball, which has exploded in Southern California. Managing editor Ann Herold chronicles the adrenaline high of the competitions and the growing financial toll that this adolescent fervor has imposed on parents.

The take-away? We all have our passions. In December, instead of showing up at one of Edelson’s joints or spiking a ball over the net on a hardwood court, I’ll be seeing the new Les Misérables movie. I’m anticipating sharing the line with that tribe of former high school theater geeks who can’t resist film adaptations of musicals, even when that means stomaching Madonna in Evita or Pierce Brosnan in Mamma Mia! It’s our rite.

Also in the December issue:
With L.A.’s thermometer predicted to hit 80 degrees on Thanksgiving weekend, you might be wondering what it’s like to be somewhere that’s actually cold this time of year. From Tahoe to Taos, we map out 12 perfect winter getaways.

In our Speak Easy Q&A, editor-at-large Amy Wallace chats with Nashville creator Callie Khouri about getting a green light for a red state show in a blue state town. The Oscar-winning screenwriter of Thelma & Louise also shares her perspective on women in Hollywood.

Spago’s got a new look and a new menu, so it was time for restaurant columnist Patric Kuh to reassess Wolfgang Puck, who “became the city’s essential chef because forward is the only direction he moves in.”

Have you noticed that high-flying Boeing 747 that seems to have landed on a hill above Malibu? It’s somebody’s house, and this month we invite you inside the fabulously imaginative structure.

After seeing Daniel Day-Lewis in Lincoln, arts columnist Steve Erickson believes that he has indeed proved himself the world’s greatest living actor.

Flush with foreign capital, Chinese investors are sinking money into property in L.A., as revealed by business columnist Mark Lacter.

In a beautiful essay (does she write them any other way?), Open City columnist Anne Taylor Fleming, who lost her husband, Karl, this summer, admits that she needs the companionship of Karl’s caretaker more than ever.

Daniel Day-Lewis may be the greatest living actor, but for my ticket Ang Lee is the greatest living director. That’s why I’m thrilled that he provides our L.A. Story this month, in which he discusses the two parts of the city he says he knows best: movie culture and Asian culture. (And kudos to him for the spellbinding Life of Pi.)

Clubbing may not be my thing, but reading (and moviegoing) sure is. I’m giving thanks for this issue!