Home Uncategorized A Sideline Report on “Eyes on the Ball” 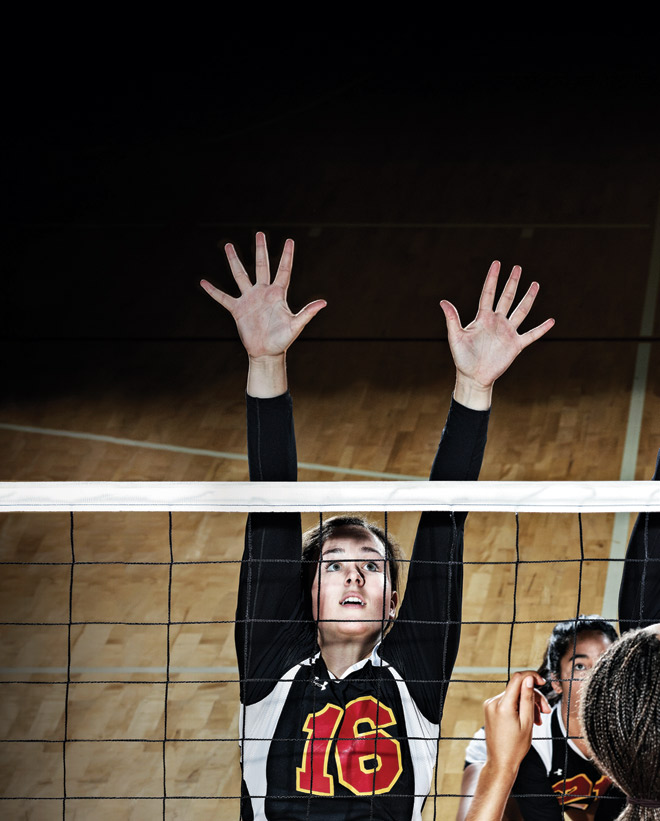 In “Eyes on the Ball” you write about L.A.’s girls’ club volleyball circuit, which has been growing since 1972, when President Nixon mandated that colleges and universities award the same number of athletic scholarships to women as they do to men.
Title IX, yeah. All women’s sports benefited and all men’s sports were hurt by that, except football and basketball, because colleges get a set number of scholarships for men and the same number of scholarships for women, and they give the bulk of their men’s scholarships to big sports like basketball and football, which means they have very few scholarships left over for other men’s sports. Women’s volleyball gets 12 scholarships and men’s volleyball gets just 4 ½.  All these men’s sports are dying at the collegiate level. If you look back at the Olympic Games in London, the women’s teams all medaled—water polo, volleyball (beach and indoors), and soccer. The men’s teams either failed to qualify or got knocked out before the title round. So it was kind of the Title IX Olympics. The talent pool for women is so deep in these sports now, and for men it’s not because the scholarship rewards are no longer there.

Why do you think girls’ volleyball in particular is attracting so many new players?
The girls are thinking about scholarships because their parents are thinking about scholarships, and it’s a fully funded collegiate sport now, which means there are 12 scholarships available at every college that offers volleyball, and almost 100 percent of colleges on all levels offer them. That’s hundreds and hundreds of teams with scholarships. But they are also playing for other reasons. It’s a very feminine sport. It’s intimate without requiring close contact. I think a lot of girls tire of basketball because they don’t like the physical contact, and they don’t like the constant running. Water polo is wicked. Those girls are gouging each other under the water. So those are two sports that right away have constant contact, and a lot of girls don’t want that in their lives. Soccer, which has some contact but not as much as those other two sports, is not an intimate environment. A volleyball court is 30 feet-by-60 feet. You get to commune in a way that’s really special.

You write in the story that volleyball is the most feminine girls’ sport. Has it gotten girlier as its popularity has grown?
Oh yeah. Uniforms got cuter and cuter. They used to be not cute. Now they are almost scandalous.

Club teams can cost families anywhere from $4,000 to $7,000 per season. Are lower- and middle-income families participating? How?
There is real concern that the sport is pricing some kids out. A lot of times a club program will bring someone in at a reduced fee out of the kindness in its heart. There is also Starlings, which is a wonderful volleyball program that started in San Diego. It’s a low-cost alternative for club volleyball, and the costs are subsidized so the girls get to play for next to nothing. They don’t have the money to travel, but they might go to a local qualifier. Ann Davenport, who is [pro-tennis player] Lindsay Davenport’s mom, started a tournament she holds every summer that’s essentially a super-fun, low-cost meet. Ann knew there was a group of people who couldn’t afford to go to the big qualifier in Phoenix to compete, so she set up this festival at the American Sports Center in Anaheim. The players get as excited at that tournament as they get at any qualifier for the Junior Nationals. It’s just the thrill of winning. Unfortunately, if your daughter competes only there, she just isn’t going to get noticed because high-level coaches aren’t attending. The girls have a blast, but it’s not a career maker.

Why don’t more parents encourage their daughters to try a less expensive sport?
The solo sports—tennis, swimming—are tough, and those aren’t cheap, either, because you have to hire a coach to get to a level where you could get a scholarship. I don’t know what the club fees are for water polo or softball, but I know soccer is just as expensive. Many parents think the cost of joining a club will be paid off because their kid will get a scholarship. Most of them are deluding themselves. But they also see how much their daughters love the sport, and they can’t deny them it. Stevi Brown [one of the players on Club Troy] is a perfect example. She came to the game a little too late to be scholarship material, but it didn’t matter. At a tournament I sat next to her mom, who had her own education entirely paid for by athletic scholarships, and she was mystified when Stevi chose volleyball over sprinting, which Stevi was great at. But she also didn’t care. She said, “We’ll pay whatever because Stevi loves it so much.” I think a lot of parents are willing to invest in the sport for that same reason.

Club Troy, the team that you follow in the article, attends lectures by a nutritionist. I take it club volleyball is not just about what happens on the court.
They met with a nutritionist regularly. That’s what I really like about [Club Troy] coach Mick Haley’s attitude. It’s about caring about the welfare of the team. When we spoke, he had just gotten a call from a player he had recruited, and he was so ecstatic to get her. I said, “What do you like about her?” He said he had gone to a tournament in Houston where she was playing and that he couldn’t leave because she was so aware of her teammates and her coach—just an ideal team player. And from that moment on he was hooked. It helps of course that she was tall and athletic. But character counts. It’s that John Wooden approach to sports: What you should take away from team sports is how to become a better person, learning to listen, being humble where necessary, and being competitive.

You played volleyball competitively as a girl. What did the sport teach you?
A sense of accomplishment. You know, I did this. I became good at this. You get lost in the sport. It’s a wonderful escape because it teaches you to forget about everything but being in the moment and staying focused. You can’t be thinking about what’s happening in life while you are on the court. All that is gone. It’s a great present, really, because you can escape the things that might be weighing you down.

The L.A. Convention Center will hold its first Junior National Championships qualifier in 2014. What should fans of the sport look forward to seeing, and what does it mean for L.A.?
It’s fabulous, especially for the L.A. clubs, because the mandatory tournaments are mostly held elsewhere, so the parents are road weary at this point. Now they have a qualifier in their backyard. I think it’s going to be great, too, for families from outside of L.A. who want to experience a city. The L.A. Convention Center is right in the scene that’s developing downtown, so people will see L.A. in a really interesting, vibrant way. The meet itself is mind-boggling. Imagine walking into that convention center and there are more than 40 courts with 20 girls per court. You walk in and can’t believe what you are seeing—all these flying limbs and this constant noise and the refs’ whistles going off. There’s nothing like it.

ALSO: Read “Eyes on the Ball”