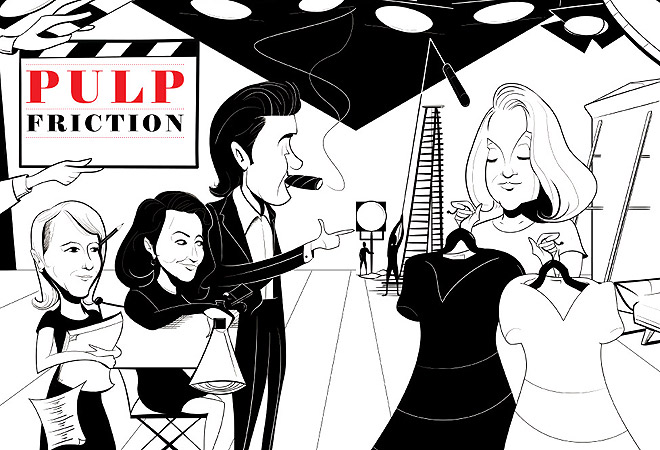 In Los Angeles magazine’s December issue, Patrick Goldstein, the award-winning film writer and former Los Angeles Times columnist, tackles the troubling world of the Hollywood “trades,” the four viciously competitive news outlets that cover all things entertainment. Everyone knows that the days when Variety and The Hollywood Reporter battled only each other for dominance are long gone, with newcomers Deadline and The Wrap turning the race to win a coveted “exclusive” into nothing short of a blood sport. In recent days, some of the journalists involved—and the mud they so eagerly sling at each other—have even made their own headlines.

Goldstein can’t avoid the bitterness such sparring has engendered (his in-depth interviews with Deadline founder Nikki Finke and Sharon Waxman, CEO and editor-in-chief of The Wrap, among many others, yield plenty of it), but he delves deeper than the vitriol, analyzing how the profit imperatives and the hunger for online traffic have changed entertainment journalism forever. The upshot, Goldstein argues, is that quality reporting on America’s leading export—entertainment—is becoming an endangered species.

Goldstein reveals that according to Nikki Finke, she and Jay Penske, the businessman who purchased Deadline (in 2009) and Variety (in 2012), have never met in person:
“In early November, after a tumultuous day of mediation in which Finke and Penske—who, according to Finke, have never met face to face—sat in separate rooms and communicated via intermediaries, Penske released her from her contract. ‘Jay Penske has just told me I am free to leave,’ Finke tweeted. ‘He tried to buy my silence. No sale.’”

The Wrap’s Sharon Waxman compares Nikki Finke, who alleges Waxman “pummels” her sources for information, to a gangster (and Finke responds):
“Not everybody in this town operates like a Mafioso,” Waxman says. “The day Nikki Finke gives me journalism lessons is going to be a cold day in hell.” (What does Finke say to that? “I am very proud that my boss nicknamed me ‘The Don.’”)

At today’s trades, accuracy is valued less than speed, Goldstein asserts:
“The race to be first has spawned a sketchy ‘we’ll fix it in the mix’ style of journalism. ‘Everyone in marketing and PR,’ says one corporate publicist, ‘has a tale that goes like this: When I told the reporter their story wasn’t true, they said, ‘We’ve gotta run it to drive traffic. If it’s wrong, we’ll correct it afterwards.’’”

Waxman is driven by a desire to get “picked up on Google Search:”
“When, sitting in her office, I told Waxman that studio executives I’d talked to say the trades have less influence than ever because of the constant chirp of “Exclusive!,” she bristled. ‘The studios can criticize all they want…but if you’re first, you get picked up on Google Search. If you’re not in the game, you’re not going to get the big Ben Affleck-as-Batman stories, which we were first on.’” [In fact, Variety was first on the story.]

Goldstein explains why all of this matters:
“If this were just about infighting and cash flow, it would make sense to say ‘Who cares?’ But it isn’t. It’s about the future of entertainment journalism. And that matters, any way you slice it. Movies and television are America’s most potent cultural export. As the entertainment business is being reinvented again and again, much is uncertain. What is going to happen to American films in a few years when China becomes the world’s largest market? Is a new generation weaned on iTunes and YouTube losing the urge to frequent movie theaters even as studios commit hundreds of millions to summer extravaganzas? What will happen after Netflix and Hulu liberate TV shows from mandatory running times and commercial friendly cliff-hangers? At a time when mainstream media is in retreat and providing less ambitious coverage, the trades should be in the lead when it comes to making sense of it all.”

For more from the December issue of Los Angeles magazine, pick up a copy (on newsstands November 28) or subscribe.