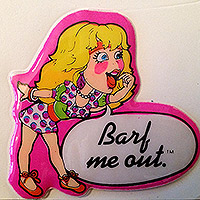 Tomorrow night, Tuesday, our ’80s film series (in celebration of our July ’80s issue, on newsstands now) is going totally, like, valley. To get yourself in the spirit for our special screening of Valley Girl, we’ve got a bit of nostalgia for you.

Frank Zappa was working on his album Ship Arriving Too Late To Save A Drowning Witch when his daughter Moon Unit started using a strange new jargon. “I’d come home speaking the Valley lingo,” the teenager told the AP in 1982. “I absorbed everything that I’d overheard from parties, and bar mitzvahs, and the Galleria.” Their song Valley Girl became a huge hit that summer, and Zappa was quick to license merchandise including lunchboxes, a talking doll, and these puffy stickers.

This particular set lingered at a Van Nuys Toys “R” Us for about five years until Brooke Keesling found them on the sale rack. “I had to have them,” the Cartoon Network executive and CalArts animation instructor told me. “I’m a proud native of the San Fernando Valley.”

Valley Girl will be screening at 7:30 p.m. at ArcLight Cinemas Hollywood Tuesday, July 8. Get your tickets now!

CityDig: The Future of Los Angeles According to the ’80s