Home Fashion Why It’s Impossible to Envision Life in L.A. Without American Apparel 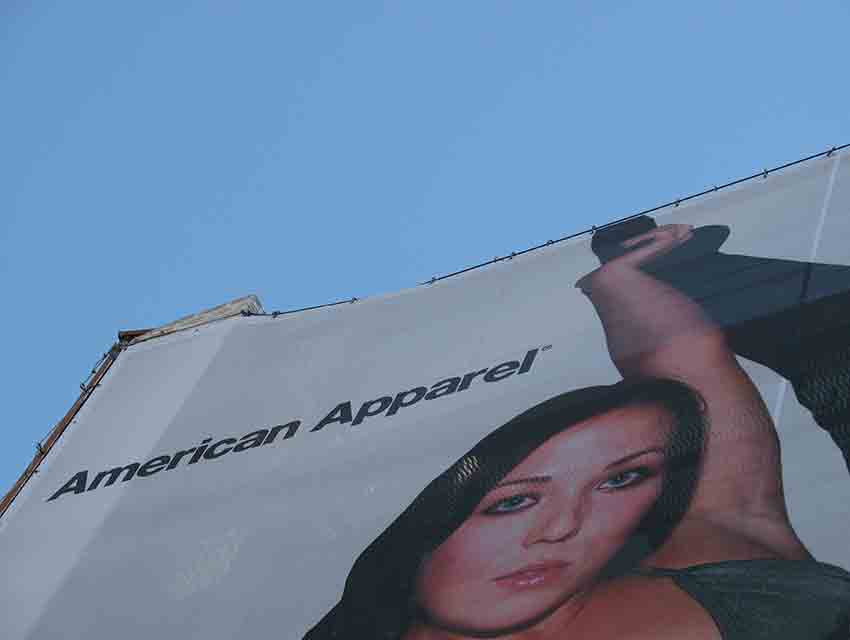 Bankruptcy. Yikes. It seems American Apparel, the maker of spandex shorts so tight one might long for the comfort of a whalebone corset, is suffering from one serious financial wedgie. I’ll let the bondholders and analysts figure out how the L.A. company went from global brand to bargain bin, but articles that use H2O metaphors such as “drowning in debt” and “liquid fragility” make me suspect that I should 1) stock up on underwear before heading to dinner and 2) brace myself for a vastly different urban landscape—a world without American Apparel advertising.

To lament the potential loss of advertising seems silly—I don’t disagree—but American Apparel’s campaigns have been among the most controversial, eye-catching, and original in L.A.’s unique billboard history. To give credit where credit is due, O.G. billboard queen Angelyne set the mood with her 1980s bikini-clad ads. Decades later, American Apparel’s capture the raw allure of men and women (mostly women) in a way that is electrifying and unsettling. Whether you hate the ads, find them titillating, or both, they get your attention in a world crowded with half-dressed women and corporate logos. Even the more bland, more corporatized ads the company has put out more recently, which seek to emphasize the company’s manufacturing and sustainability practices (also under fire), are omnipresent—even if their punch is as faded as the 1970s photographs they once tried so hard to emulate.

As someone who’s lived here “only” a decade, I haven’t known a walk down Melrose or a drive along Sunset without American Apparel’s presence, but it looks like I might one day. The prissy, roadside moralist in me is cool with all of this, but my Don Draper-like id is going to miss a bit of that freeway frisson. If filing for Chapter 11 doesn’t save the company and its billboards do disappear, we’ll be left with Freeze the Fat ads. Say what you want about American Apparel, but the only thing more exploitative than a half-naked woman trying to entice you to buy clothes is a half-naked woman trying to shame you into losing weight.

The Resurrection of Dov Charney

Amazon and Forever 21 in Talks to Buy American Apparel