Home Uncategorized Who Are The Push Girls? And How Did We Send Them To... 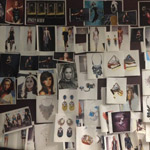 Who are the Push Girls? The Push Girls are about to launch the second season of their critically acclaimed docu-drama on the Sundance Channel in June. The show follows three paraplegic women and one quadriplegic woman living in L.A. as they battle misconceptions about paraplegia and quadriplegia and navigate the day-to-day challenges many of us all face. The show has gotten rave reviews and won some celeb fans, among them Ellen De Generes (who called Push Girls a “fabulous show and an important show, because everyone should be represented”) and snarksmith Perez Hilton, who lauded the girls on his blog. But to truly understand what Push Girls is about, check out this teaser clip from their show.

We were thrilled when they agreed to model for our May issue fashion feature, but we had a lot of decisions to make: What would they be doing and wearing? We wanted to get their input, so Los Angeles photo editor Amy Feitelberg and I met the Push Girls after they wrapped an episode at Santa Monica beach. It was freezing, and seven of us piled into a mini-van to hash out concepts. I had a one word concept in my mind: space. In space everyone is subject to the same laws of gravity, no one walks. To find out how the fashion feature’s storyline grew from there, check out the behind-the scenes video taken during our photo shoot. Next, click through the final fashion spreads that appear in our May issue, on newsstands now.

Finally, you can click through the slide show above to see the evolution of the shoot. These are the images I tacked to the giant corkboard in my office—from initial sketches to inspirations, hair and make up looks, and outtakes of some of the out-of-this-world clothing and accessories you won’t see in the final images.