Home Uncategorized WHAT THE F*SHION: A New Yorker’s Guide to the Perfect L.A. “Outfie” 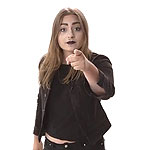 The new VFiles spoof web series “WHAT THE F*SHION” follows New York stylist Casey Jane Ellison as she moves to L.A. and gets an “L.A.-esque-ish” makeover, struggling to find the perfect West Coast “outfie.” This East Coast vs. West Coast showdown is, of course, nothing new. But the satirical fashion vlog is far from settling the rivalry once and for all.

“WHAT THE F*SHION” has received an astonishingly positive response as a perfect mockery of fashion in Los Angeles. Paper Magazine says it captures “every iteration of L.A. style,” including “looking like you’re permanently attending Coachella.” But does Ellison really get what our great city is all about? Her take on the Kardashian wannabe is a cheap shot and misses the mark. However, her portrayal of L.A.’s kale-eating, Alexa Chung-type may be spot on, if over-the-top. Also not captured: Our ability to laugh at ourselves (see below).