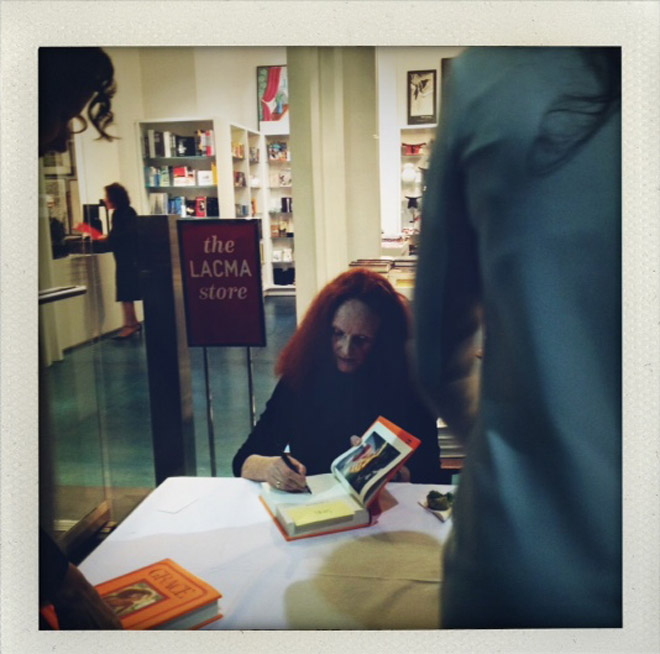 What do you wear if you know you’re going to meet Vogue creative director Grace Coddington and that every fashionista in town was going to be at the event as well?

I left the house yesterday morning, rushing off to work, without consulting my calendar. Had I remembered the Grace Coddington Q & A and book signing was happening last night at LACMA, I would’ve given my outfit much more thought. Instead, I turned up in wide-legged trousers and a vintage shearling coat. (Add to my ensemble insecurities the fact that I found out earlier in the day that a monkey outside of an IKEA in Toronto became an Internet celebrity for donning a very similar jacket).

We spotted Cindy Crawford, Amber Valetta, and one half of Rodarte among the über-stylish crowd (I’m talking front-row-NY-runway- stylish). During the interview led by R.J. Cutler who directed the documentary The September Issue (a behind-the-scenes look at the inner workings of Vogue), Coddington revealed why she isn’t afraid of Anna Wintour. “I guess, because I’m older than she is,” the redheaded icon stated. She also expressed a lack of interest in being a celebrity— and working with them. “You can boss models around on a fashion shoot,” Coddington said last night, “but you can’t boss Lady Gaga around.” She talked about the big budget fashion shoots of yesteryear, working alongside the most famous photographers in the world, and her gripes with the digital world.

It’s Coddington’s earnestness and fearlessness mixed with remarkable vision, taste, and talent that has won her so many fans, myself included. And so after the interview, dozens of us waited in line, first at the LACMA book store to buy Coddington’s new book, Grace: A Memoir, then waited in a second line for over an hour to have her sign it. Check out what a few of them wore…