Home Fashion Weed You Can Wear: A Closer Look at Patagonia’s Newest Wetsuit 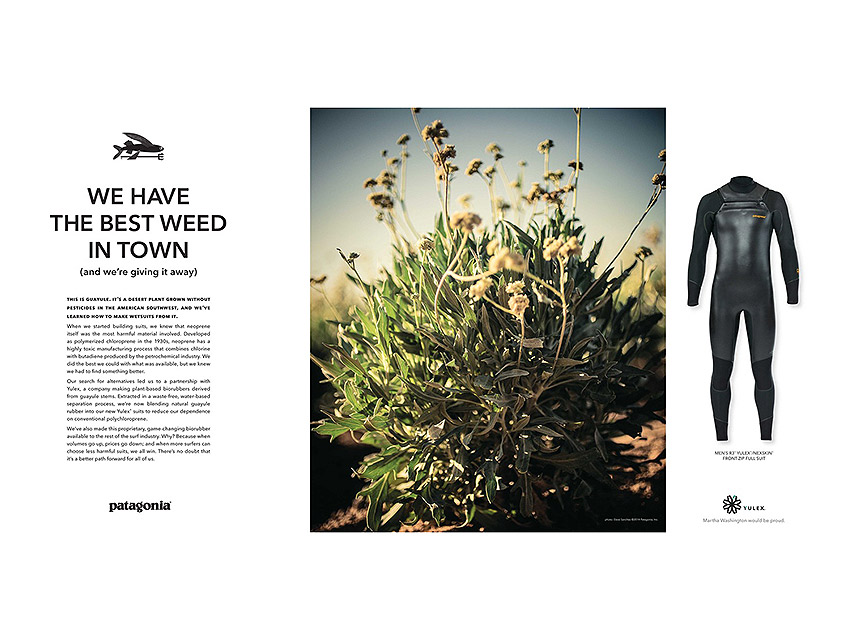 Ventura-based wetsuit designer Patagonia has announced its advertising campaign for their newest product: Marijuana-enhanced wetsuits. The ad, which perhaps misleadingly billboards that the company has “the best weed in town—and we’re giving it away,” can be seen in select print publications starting this fall.

Considering recent tensions concerning marijuana legalization across the country, Patagonia is sure to incite controversy with its advert. That said, the only high you’ll get while wearing the suit will be from shredding some gnar swells—it doesn’t actually contain the weed that its eye-grabbing tagline would suggest.

Founded in 2006 by Yvon Choniard and his wife Malinda Pennoyer, the company proclaims in its mission statement its intention to “…use business to inspire and implement solutions to the environmental crisis.” Their line of plant-based Yulex wetsuits does just that: Neoprene, a synthetic, petreoleum-derived rubber key in the production of most wetsuits is, unfortunately, extremely harmful to the environment. On top of that, its manufacture is highly toxic.

In search of a safer, “greener” alternative, Patagonia has partnered with Yulex to make their wetsuits from plant-based biorubbers derived from the weed guayule. The company is now manufacturing the Yulex wetsuit in a 60% guayule, 40% neoprene blend (available for a cool $529), and eventually hopes to eliminate the need for neoprene all together. So, what are you waiting for? Surf’s up!