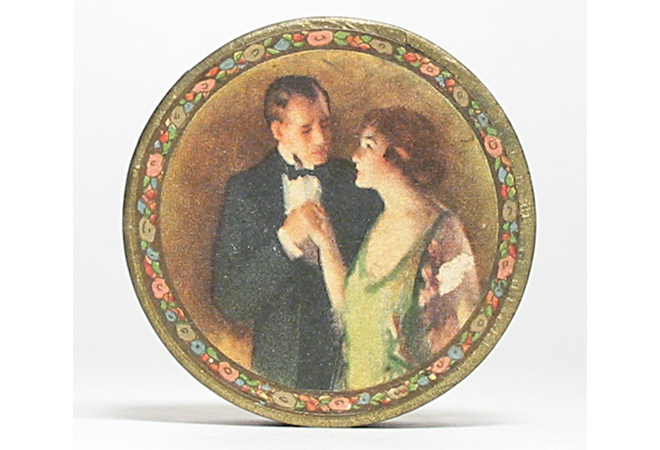 I was intrigued by the unusual design of the Woodbury Face Powder box (c. 1920) when I bought it in an online auction—unusual because it depicts a couple. It is exceptionally rare—perhaps unprecedented—to find the image of a man on a face powder box. Of course I immediately wondered about the pair in formal dress. Are they on their way to a dance? Did they just get engaged? Are they embarking on a love affair? For me, they represent the post-World War I generation of men and women who would launch the first truly modern decade of the 20th century.

The end of WWI signaled the beginning of a social revolution characterized by monumental changes in the lifestyles, attitudes, and sexual habits of the generation who had survived the war. The younger generation viewed their elders as stuffy hypocrites with antiquated Victorian manners. People looked to Hollywood films, and F. Scott Fitzgerald’s novels, for guidance. The couple on the Woodbury box had not yet fully embraced the Roaring ’20s. The young woman bobbed her hair and made up her face in imitation of Colleen Moore as seen in her blockbuster film, Flaming Youth. Her beau slicked his hair back with brilliantine and ditched his evening duds for Oxford bags (baggy trousers that were in style during the early 1920s), modeling himself after Princeton undergraduate Amory Blaine, the protagonist in Fitzgerald’s This Side of Paradise.

But their lifestyle choices would not have been influenced by movies and books alone—theirs was the first generation to grow up on a diet of advertising. A rewarding life was no longer based on restraint and denial but rather indulgence and self-fulfillment. One advertising professional put it this way: “Sell them their dreams. Sell them what they longed for and hoped for and almost despaired of having.” It seems to me that not much has changed in 90 years.