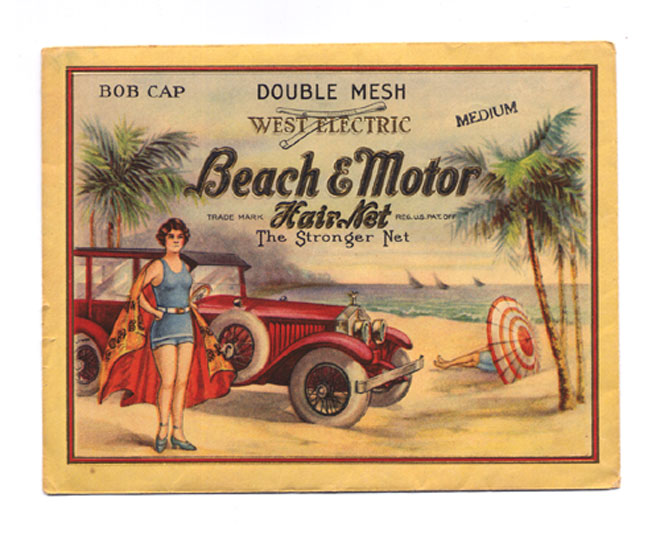 No other item in my collection captures the feeling of Southern California during the 1920s as well as this West Electric Beach & Motor Hair Net envelope.

In addition to producing hair nets, West Electric, based in Philadelphia, manufactured hair curlers and shampoo. The company patented one of its hair curler designs as early as 1909 and ads for their products appeared in magazines such as The Ladies’ Home Journal.

The sandy beach and graceful palm trees depicted on the package are evocative of any location offering surf and sand, but the car is a dead giveaway of the L.A. life—no other place has embraced car culture with such frank enthusiasm and unconditional love as Southern California.

As soon as I saw the hair net package I was drawn into 1920s Los Angeles, and the birth of modern styles in swimwear.

Prior to the 1920s women’s bathing suits were more concerned with coverage than with comfort. Imagine jumping into the surf at Santa Monica Beach in a black, knee-length, puffed-sleeve wool dress. Following WWI everything changed. Women painted their faces and bobbed their hair, and bathing suit designs started to reflect their new freedom. No right thinking flapper would show up at a beach party in anything that covered her knees or her arms.

In 1921 a local fashion show introduced inflatable bathing suits, which were described as pretty and practical because they allowed the wearer to float in the water, just like she was using water wings. The style sank without a trace.

Following the discovery of King Tut’s tomb by Howard Carter in 1922 people were consumed with all things Egyptian, and of course Egyptian themed bathing suits briefly became the rage on local beaches. What made the water wear Egyptian themed? Why the hand-painted hieroglyphics representing inscriptions from the Pharaoh’s tomb, of course.

Bathing suit designs then changed forever in 1925 when Fred Cole entered the swimwear business. Cole had been a silent film actor, an occupation his parents thought thoroughly disreputable, during the early 1920s, so they were pleased when he suggested that they start a swimwear line at their knitting mills in Los Angeles, and the staid sounding “West Coast Manchester Knitting Mills” became “Cole of California.” Cole would bring Hollywood glamour to the swimsuit industry.

In 1936, Cole hired Margit Felligi, who served as Cole’s head designer until 1972. Felligi was an inspired innovator and in 1943, during the wartime shortage of rubber, she created the first side-laced swimsuit. It was called the “Swoon Suit” in honor of popular crooner Frank Sinatra.

She continued to make fashion history over the years with her significant contributions to fabric and design, including the 1964 “Scandal Suit,” which was considered to be one of the most overtly sexy bathing suits of all time.

Cole still exists as Catalina-Cole, and in 1997 the company launched another winner, the “tankini.” I think Fred Cole and Margit Felligi would be pleased.