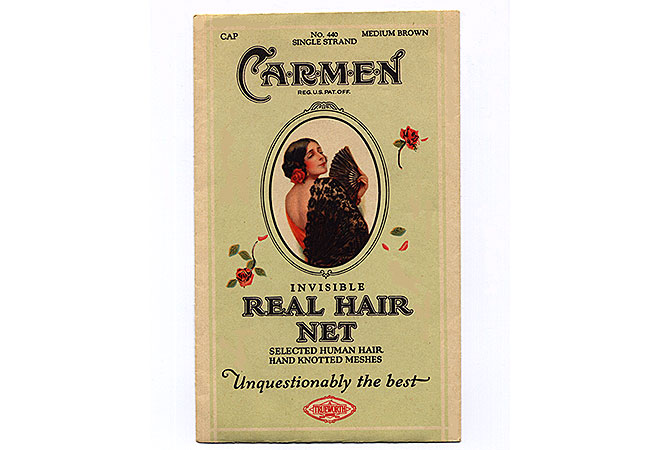 Ten years ago a friend of mine gave me this charming 1920s Carmen Hair Net envelope as a birthday gift. I love the design, which appears to be a nod and a wink at Bizet’s 1875 opera Carmen. The opera tells the story of a Gypsy temptress and a corporal, Don José, who meet cute when Carmen, a cigarette-factory worker, tosses a rose that lands at the military man’s feet. She captures his attention and his heart, but of course the tale doesn’t end there. The same thing is true for the hairnet—there is more to the design choice than meets the eye. It is my opinion that the choice of a shawl-wrapped Spanish miss for the package had more to do with a fashion trend than with the opera.

During the mid-’20s, when the Carmen net was manufactured, women’s fashion was defined by a single dramatic accessory: the Spanish shawl. It is impossible to overstate the impact that the shawl had on women, particularly in Los Angeles. The shawls were exquisitely embroidered, ample enough to envelop a woman like a cocoon, featuring long, luxurious fringe. The glorious wraps were a stunning accent to daywear and could make an evening gown transcendent. A newspaper advert circa 1925

Women were irresistibly drawn to the exotic shawls, but they were expensive, sometimes costing as much as $500 (the equivalent of $6,840 in today’s dollars). However, like most high-end vogues, the shawls became so popular with Los Angeles fashionistas that inevitably knockoffs, many of them mass-produced in China, made their way to the marketplace.

For over three years, women’s columns were obsessed with the trend and reported on it regularly. In December 1926, a local newspaper columnist, Alma Whitaker, wrote a piece in which she announced that her life without a Spanish shawl had become insupportable; she went on, in hilarious detail, to recount her quest for the perfect inexpensive alternative to the pricier models.

Alma was thrilled when she discovered a breathtaking white silk Spanish shawl spread out in a store window and she couldn’t believe the price—$18.50 (still rather hefty—equivalent to $253 today). Once at home she preened and pirouetted before her mirror as she imagined herself making a splash at an upcoming soirée.

But then her troubles began. Alma couldn’t get the hang of wearing the slippery shawl, and to make matters worse the fringe had the nasty habit of looping around the legs of hapless waiters and snagging on doorknobs. She may have been able to live with the rogue fringe, but when Alma spotted a newspaper ad offering a shawl similar to hers for $7.35 ($101) she was crushed.

Alma had learned a hard lesson—fashion fads are rarely appropriate for every woman. In the end, rather than turning her shawl into a bedspread or a lampshade, she wisely donated it to a local charity.