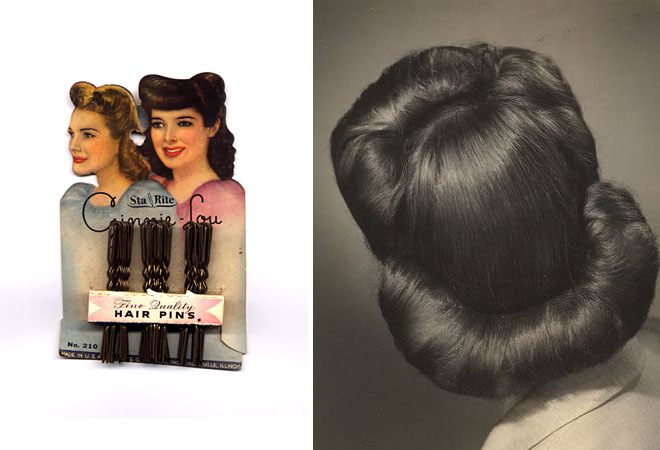 I paid $8 for this pack of Sta-Rite hair pins at a vintage textile show (cosmetics items pop up in all sorts of places) and it obvious to me from the women’s hairdos that the card dates from the 1940s.

I have dozens of items from the ‘40s in my collection because I am fascinated by the ways in which patriotism was used to market cosmetics to women during WWII. American pride was often denoted by red, white, and blue packaging as well as in advertisements which depicted women engaged in war work, or as pin-up girls awaiting husbands or lovers off fighting for our country. These ads make it clear that the women shown look as beautiful as they do thanks to a certain face powder or lipstick (which came in a wood or paper tube because metal was required for the war effort). Patriotic beauty didn’t stop at the hairline, either; each of the women on the Sta-Rite card is wearing her hair in a Victory Roll.  If you’re a vintage fashion maven you’re probably already familiar with the style but, if not, a Victory Roll was one of the most popular ‘dos of the WWII era.

Magazines and newspapers all over the country provided women with directions for creating Victory Rolls; in fact, in 1944, the Los Angeles Times featured an article on “Factory Glamour” with these styling tips: “Part hair in center…roll it up on the sides, higher near the crown, tapering to the back of the neck.  From the rear you show – a V for Victory!”

When I see the two young women on the Sta-Rite hair pin card I reflect on the meaning of patriotism. Victory Rolls may seem like a superficial way to show support today; but I have always been impressed by the eagerness of women during the 1940s to embrace styles that reflected their commitment to something greater than themselves. I don’t think that selflessness ever goes out of style.