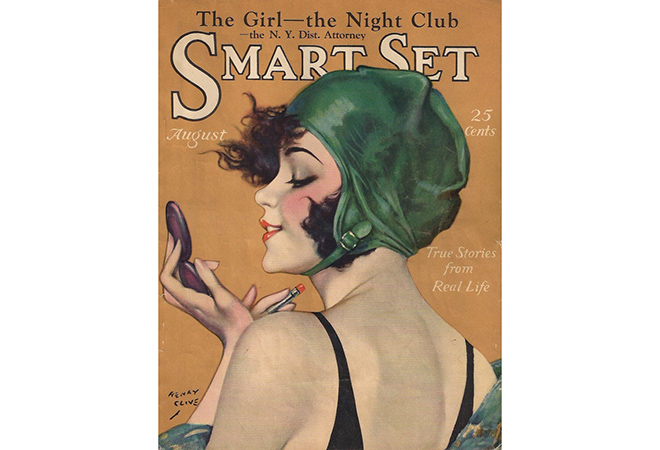 Mirror, mirror, on the wall. Who is the fairest of all? The chic flapper on the cover of the August 1926 issue of Smart Set magazine knows the answer: She is. With her Cupid’s bow lips and dark, wavy hair barely contained by that swim cap, she is irresistible. But the cute flapper wasn’t the only reason I purchased the magazine cover, for a mere $15, at an antique mall over a decade ago. No, I had become intrigued with commercial art depicting a woman gazing at her own reflection.

There is something arresting about such images. It’s a glimpse into a woman’s life in an unguarded moment. The woman could be preparing for a first date that will lead to lasting love, or she might be readying herself for the mundane tasks associated with everyday life.

Prior to the 20th century, a woman dressed for the day and probably didn’t encounter her reflection again, except by accident, until she returned home. But when women first began to powder their noses in public—to apply lipstick, eye shadow, rouge—they created a demand for convenient, attractive portable mirrors, and the compact was born. The notion of a portable mirror wasn’t a new concept—in fact, thousands of years ago early preeners made use of small bits of polished metal or obsidian (volcanic glass) to admire themselves on the go. Glass mirrors aren’t new either. They have been around for at least 2,400 years but, sadly, no one has ever identified the person responsible for this wonderful invention.

The likeness of a woman gazing at her reflection may well summarize the last century of beauty culture in America—we have become obsessed with our own image. According to a 2012 survey conducted by the U.K.’s Daily Mail, some women look at themselves in the mirror as many as 71 times each day. Gentlemen, you can wipe those smug expressions off of your faces, because there are men in the U.K. who admitted to checking themselves out as many as 66 times a day. I can only imagine the numbers for women and men in the U.S. would be comparable.

The survey further revealed that people in their 20s are the most image-obsessed, which probably surprised no one. However, as people age they spend less time checking their reflection in a mirror. But I like to believe that the 20-something flapper on the Smart Set cover embraced her reflection as she aged.

Or perhaps our gazing diminishes over time because we grow more comfortable in our skins. Smiling into a mirror simply isn’t equivalent to smiling into the eyes of a loved one—mirrors are inorganic bits of material that are not up to the task of reflecting intangibles like soul, and they don’t smile back with compassion, understanding, or love.