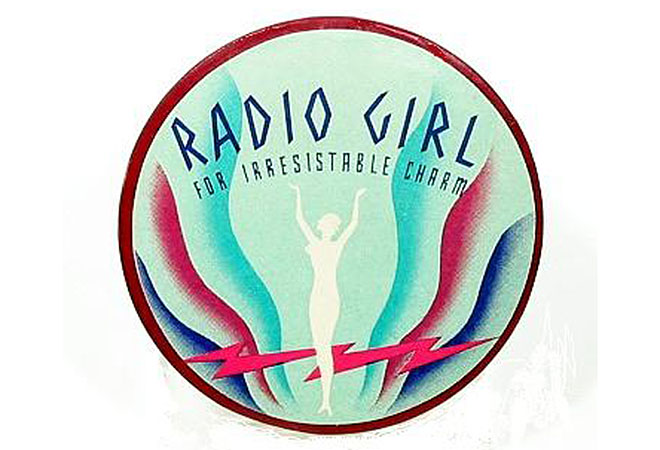 I found the Radio Girl face powder box at a compact collectors convention in Las Vegas—it was one of the first items I acquired when I began to collect vintage cosmetics ephemera nearly 20 years ago. I was particularly fortunate because most of the other attendees were focused on the compacts and vanity cases, so I picked up this box, and several others, for under $25 apiece.

Advertising art reflects its time, and the colorful zigzags of the Art Deco graphic combined with the silhouette of a woman, her arms raised above her head like an antenna, suggest to me that the Radio Girl box is a product of the late 1920s or early 1930s.

Radio was the biggest thing to happen to technology in the early 20th century, and everyone was talking about it. During its infancy, broadcast radio didn’t offer much in the way of programming—it consisted mainly of classical music and local preachers seeking acolytes—but the promise of radio was that it had the potential to bridge the gap between the coasts. It should come as no surprise that one of the first national broadcasts was a sporting event: The 1927 Rose Bowl game was heard by fans from West to East. (For those of you dying to know who won, Alabama or Stanford, it was a 7-7 tie!) Today we pride ourselves on our mobility and the convenience of our smart phones, tablets, computers, and the myriad devices we carry with us each day. Portability was a concern for early radio listeners too. Sure, it was nice to gather the family around the Zenith console in the evening and listen to a college glee club or a repeat of the Gilbert & Sullivan comic opera Mikado, but what if you were out during the day?

Women in Los Angeles obviously grasped the concept of portable entertainment devices very early on—as you can see in the photograph, a group of young mothers discovered a way to take their youngsters out for a stroll while tuning in their radios. If you’re wondering about the electrical outlets, they weren’t needed: Battery-powered radio sets were available as early as 1922.

I am very lucky because whenever I crave an old-timey radio experience, all I need to do is ask my husband, Scott, to turn on one of the tube radios in his vast collection. There’s nothing quite like the warm glow of a tube-lit radio dial. I love to turn off all of the media in the house that postdates 1950, mix a gin gimlet, put my feet up, and listen to an episode of The Shadow from the 1930s. It’s my idea of a perfect evening.