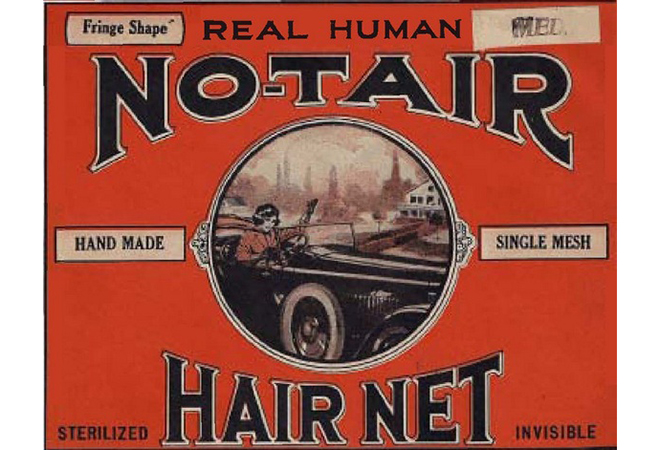 My No-Tair Hairnet is special to me because it’s the first hairnet envelope I ever bought. I found it in an online auction about 17 years ago for only three dollars. I hadn’t given much thought to the art on packaging prior to this gem, but it sparked an entirely new avenue of collecting for me.

When I’m not collecting and cataloging items for Vintage Powder Room, I research and write about historic Los Angeles crime. My particular interest is in women behaving badly, which may explain why I took one look at the woman in the sporty roadster on this package and decided that she must be a dame on the lam, speeding away from the scene of a crime.

Crime history and vintage cosmetics have more in common than you might think. Glamorous gun molls have been a staple in Hollywood films going back to the 1930s, and no self-respecting bad girl would ever have allowed herself to be seen without makeup. What if she had to pose for a mug shot? The criminal exploits of fictional molls have often been based on the experiences of real-life felons. One of L.A.’s baddest lasses was a 19-year-old platinum blonde hairdresser from Orange County named Burmah White. Burmah was glamorous enough to have been a Hollywood starlet, but she had a weakness for a very bad boy.

In 1933, she and her new husband, a good-looking, 28-year-old ne’er-do-well named Thomas White, should have been busy picking out china patterns and buying furniture, but instead they were spending their honeymoon on a crime spree. The pair perpetrated several stick-ups and a carjacking or two, but the crime that landed them on the front page of the local newspapers was the shooting of Cora Withington, a popular elementary school teacher, and her friend, Crombie Allen.

Cora and Crombie were stopped at a traffic light when Burmah and Thomas pulled up alongside them. Brandishing a pistol, Thomas jumped out of the vehicle onto the running board of Crombie’s sedan. He pointed his weapon at Cora’s head, and in dialogue that could have come straight out of a Warner Bros. gangster picture, he snarled: “Shell out, sweetheart!”

The events that followed would prove that the Whites weren’t cut out for a life of crime. In a dramatic denouement, Thomas died in a barrage of police bullets during the ensuing shoot-out, and Burmah survived to stand trial alone. She was sentenced to 30 years in prison, and served seven of them. No matter how glamorous you are, crime does not pay.