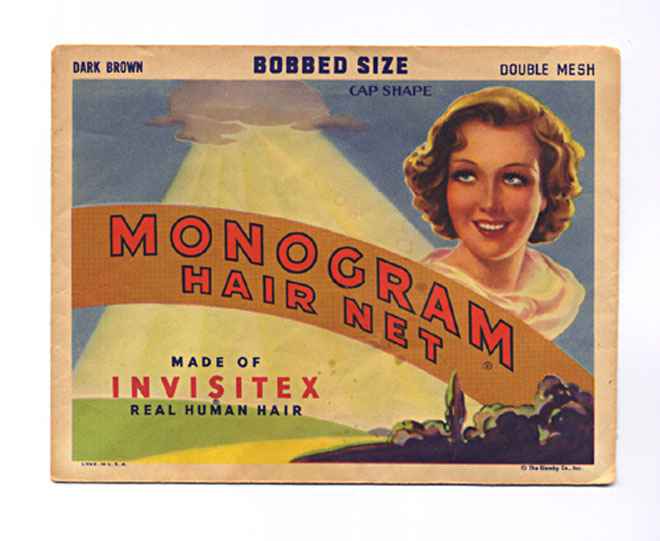 I love old Hollywood, especially the B movies of the 1930s and 40s, so when I first saw this Monogram hair net in an online auction it reminded me of Monogram Pictures Studios.

The quintessential B movie factory of its era; Monogram churned out westerns, melodramas, mysteries and, most notably, series like Mr. Wong, starring Boris Karloff. The design on the Monogram envelope above looks like it could be a studio logo, and the woman depicted on the front with her au courant hairdo and makeup could be a starlet on the verge of major motion picture career.

Of course, Hollywood stardom has proved elusive to all but a fortunate few.  Of the actors who were making pictures in the 1930s, most were not on the payroll of a major studio like MGM or Warner Brothers. They were more likely working as extras or for a small studio, like Monogram.

One young Hollywood hopeful, Carmelita Geraghty, who graduated from Hollywood High School in 1919 and began her career as an extra, made many of her films for independent studios like Monogram. In 1931 she starred in a drama entitled “Forgotten Women.” Ironically, the trials and tribulations of women trying to succeed in Hollywood is the subject of the film.

A stunning girl with beautiful eyes, Carmelita was selected as one of the Western Association of Motion Picture Advertisers Baby Stars for 1924. By 1925 she seemed poised for great things; Carmelita had appeared in The Pleasure Garden, the first feature directed by Alfred Hitchcock, and would soon accept the role of Jordan Baker in the 1926 production of The Great Gatsby. Despite these successes Carmelita’s breakthrough role never came.

The unknown girl on the Monogram hair net envelope may have shared Carmelita’s fate and never have made it to stardom in the movies—or maybe not. I like to imagine her sitting for the portrait that will forever remind me of Hollywood during its heyday.