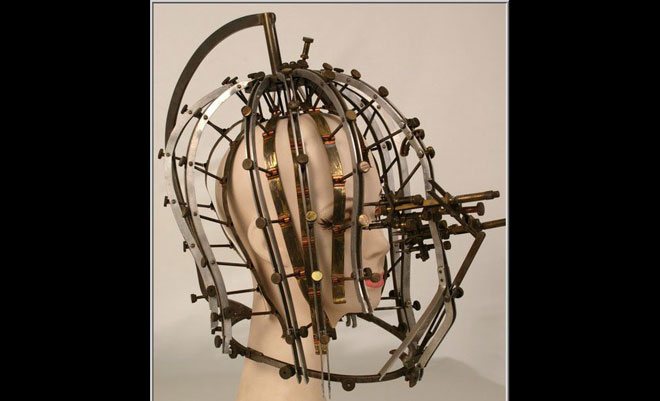 It is not possible for me to discuss the history of modern cosmetics without invoking the name of Max Factor. The man was a genius.

He created Pan-Cake, the make-up that made filming in Technicolor possible. He introduced the lipstick brush and indelible lip color that didn’t come off, even with smooching. He designed the famous “Cupid’s Bow” or “Bee-Stung” lips for stars like Clara Bow during the 1920s. In the early 1930s, when Joan Crawford went from playing wise-cracking, dance-crazy flappers to the more mature rolls for which she is now best known, it was Max who transformed her mouth from a cute pucker to the dramatic “Hunter’s Bow Lips,” which Crawford referred to as the “smear”. The look became her trademark.

Factor didn’t limit himself to creating cosmetics alone. He also invented devices like the Kissing Machine, which was used to test the longevity of lipstick formulas. In my opinion his most brilliant creation was the Beauty Micrometer, also known as the Beauty Calibrator.

At first glance the calibrator, object #210 in DispL.A. Case, Chris Nichols’ gallery of L.A. ephemera, resembles a medieval torture device, but it wasn’t designed to inflict pain; it was made to measure the contours of a woman’s face and head within one thousandth-of-an-inch! Why were such measurements needed? Why to correct with cosmetics the imperfections of nature, of course.

Here are the ideal facial measurements according to Factor:
Nose: same length as the height of forehead
Eyes: separated by a space the width of one eye.

Even the most beautiful stars in Hollywood had imperfections by these standards, but with the deft application of light, shadow, and color, any actress could become perfection personified.

The Beauty Micrometer was featured the February 1933 edition of Popular Science magazine, and was also featured in a 1935 article in Modern Mechanix. With all the buzz, Factor hoped to place micrometers in beauty shops around the world, but his plan never came to fruition. As far as I know, only one micrometer was ever constructed. Which is why, in 2009, I was stunned to discover that the machine had been placed in an auction!

To own such a rare piece of beauty and cosmetics history I would have been willing to do almost anything, but with a preliminary estimate of from $10,000 to $20,000 I feared the micrometer would never be mine. Crackpot ideas for making a quick buck filled my brain. I considered dozens of schemes, most of which would probably have landed me in jail. Then cold, harsh reality finally set in: I would have to watch the auction and hope that whoever was lucky enough to win the micrometer would treat it with care.

And yet, the auction ended differently than I’d anticipated. The one-of-a-kind Max Factor Beauty Calibrator did not meet the auction reserve! So, what happened to the calibrator? I phoned the Hollywood Museum and they assured me that it is now where it belongs: currently on display where Max Factor himself once worked.