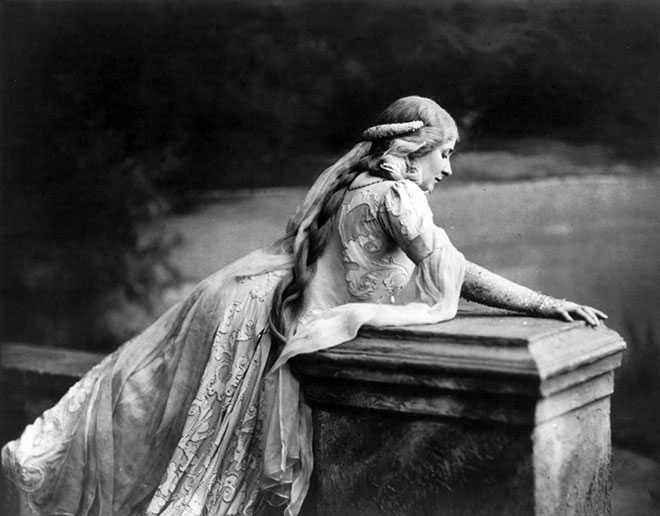 I love to shop for old cosmetic ads because they provide important information, like the dates when specific products were available. I purchased the Mary Garden advertisement below at an antiques mall for $10.

What does it remind us? That celebrity endorsements are nothing new, for one thing. In fact during the first quarter of the 20th century, female performers of all types started appearing in ads and often had their own line of products manufactured by an established company.  I profiled one such woman, actress Edna Wallace Hopper, in October 2013. Another international celebrity who promoted her own product line was opera singer Mary Garden, who partnered with manufacturer Rigaud. Unless you’re a devotee of opera you have likely never heard of her. Born in Aberdeen, Scotland, but reared in Chicago, Illinois, Mary was opera’s reigning diva from the 1910s until she retired from the stage in the 1930s. Although she traveled the world, Mary was fond of Los Angeles and performed here many times to sold-out crowds at the Philharmonic Auditorium on Fifth Street (sadly, it is now a parking lot).

By the 1910s Los Angeles aspired to become a cultural center, but first it had to brush off the dust it had accumulated during its Wild West days. Hosting a world-renowned opera company was one way to show the folks back east that L.A. wasn’t a bush league outpost inhabited by tobacco chewing cowpokes.

In March 1913, the grande dames in town put every hairdresser, milliner, jeweler, and dressmaker in the area to work. All of the shops became beehives of activity in anticipation of a weeklong visit by the Chicago Grand Opera Company featuring soprano Mary Garden.

Today’s Hollywood movie premieres often draw large crowds, but their numbers are a mere fraction of the thousands that turned out in 1913 to catch a glimpse of ticketholders arriving at the Philharmonic Auditorium. The week of opera was enormously successful, and Garden went on to perform in L.A. many more times in her career.

What I have often wished for when reflecting on this Mary Garden advertisement is a return to a more glamorous time when men and women dressed for an occasion. I’ve attended the L.A. Opera dozens of times and the audience dons everything from eveningwear to California casual. More than once I’ve curled my lip in a moue of disapproval. Then again I’ve observed men in tuxedos, chins on their chests, snoozing through Tristan und Isolde and I’ve also seen guys in T-shirts mesmerized by the same performance. If what motivates L.A. audiences is the genuine love of art, I can find nothing wrong with that.