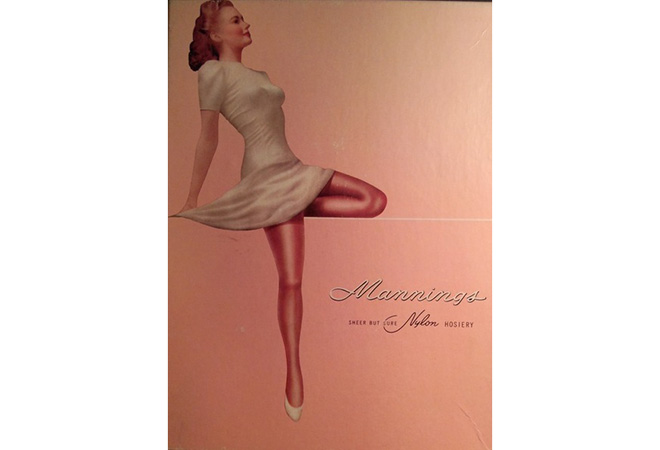 Pretty in pink, and adorned with a stunning blonde in a classic pin-up pose, the Mannings stockings box piqued my interest about 10 years ago. I almost passed on it, because it was such a departure from the face-powder boxes and hair-net envelopes that I generally acquire. However, at $20 it was an inexpensive opportunity to broaden my collection in a meaningful way—meaningful, because I believe that the social evolution of modern women can be charted in part through their choices in makeup and lingerie. Think of the early days when women rearranged their internal organs with corsets so tight that they routinely fainted and you realize lingerie indisputably and dramatically altered the lives of women during the 20th century.

The 1920s saw profound social and political changes, particularly for women, and the garter belt originated during that time as an alternative to the restrictive corsetry that had been worn previously. Ironically, it was another call for movement (literally) that resulted in the garter belt being replaced by pantyhose. Allen Gant, a textile manufacturer, was inspired to create pantyhose after hearing his wife complain about the discomfort of wearing a garter belt while pregnant. With the help of his colleagues, Gant developed the world’s first commercial pantyhose, a product called Panti-Legs, which debuted in 1959. Panti-Legs enjoyed modest success until the miniskirt became popular in the 1960s. Fashion icons Twiggy and Jean Shrimpton popularized pantyhose after being photographed wearing the new style of stockings with their miniskirts. It was the miniskirt that sounded the death knell for the routine garter belt, because the fasteners spoiled the smooth silhouette of the garment and it would have been considered tasteless for the garters to show.

Today, garter belts and stockings are worn primarily by vintage clothing enthusiasts, sex industry workers, and burlesque queens. Stockings and a garter belt, once thought to be old-fashioned and restrictive, have become associated with erotica, and for good reason—slowly rolling a sheer black stocking up your leg and fastening it to a garter is, in my opinion, one of the most provocative and sensual acts a woman can perform.

As I hold the Mannings stockings box I reflect on feminine traditions, many of which have become lost to us over the decades. Slipping into your lingerie, whether it’s a lacy bra or a slip, is a powerful daily ritual and an affirmation of womanhood. The subtle brush of silk on your skin as you move through your day should bring a smile to your face because lingerie speaks the secret language of women—and everyone is entitled to her secrets.