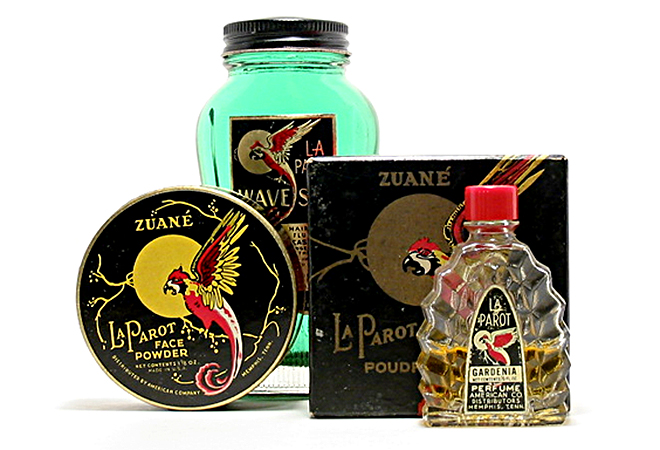 The vivid depiction of a macaw on the 1930s La Parot face powder box stopped me in my tracks at a local antiques show eight years ago—I had to have it. After a little haggling, I bought the box for $35, and immediately wondered if there were other items in the La Parot line. To my delight I later discovered a bottle of hair wave solution and a gardenia-scented perfume in an online auction—all with the fantastic parrot graphic.

The La Parot design is magnificent, but I have a more personal reason for adding these products to my collection: I love birds. Over the years, I’ve kept several parrots as pets. There was Marlowe, named after famed detective Philip, and Velma, in honor of a character in Raymond Chandler’s novel Farewell, My Lovely, and Alfalfa (Our Gang). I’ve found them to be loving, intelligent, and extremely high maintenance—you must be willing to devote years, even decades, to caring for a creature who acts like a perpetual toddler. I was in grammar school when my parents gave me my first avian friend—a small blue parakeet I called Doofus. My current companion, Kiwi, is a maroon-bellied conure, small in stature but with an enormous personality. Kiwi is an avid talker with an impressive vocabulary, much of which he uses to berate me. He routinely admonishes me to “stop it” regardless of what I’m doing, and he often looks me square in the eyes and says, “OK, turkey.”

It’s easy to become parrot obsessed while living in Los Angeles, but only if you pay attention. I am constantly amazed at how many people are oblivious to the raucous screeching that invariably signals the presence of a flock of feral parrots flying overhead, balancing on a high wire, or perched in a tree anywhere from Santa Monica to Pasadena. (Keep a lookout: It’s mostly their calls that identify them, but they fly faster than local birds, and in a zigzag pattern.) They are not indigenous to the area, and there are dozens of stories about how they became a part of our local wild life. According to some sources, during a “parrot fever” panic in 1930, a city health commissioner urged everyone who owned a parrot to wring its neck, and allegedly many birds were released instead. Others claim that the wild parrots in our midst are the progeny of pet store escapees or the dozens of exotic birds that made a break for it when Busch Gardens closed down in the late 1970s.

With so many conflicting explanations for the flocks of wild parrots in Los Angeles, I thought I would take my question to an expert. I asked Kiwi what he knew about their history, and wouldn’t you know it? It’s the one topic on which he remains mum. The mystery behind the local parrot population might never be solved, but in the menatime, I have Kiwi sitting on my shoulder as I scour the Internet for other La Parot merchandise to add to my collection.