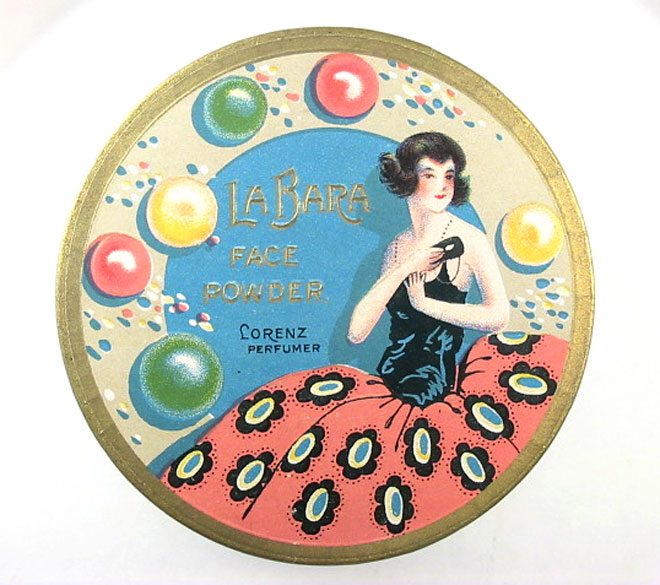 I found this charming La Bara face powder box at a compact collectors convention held in Las Vegas in the late 1990s. There was little interest in cosmetics ephemera at that time, at least at the convention, so I was able to add to my growing collection without the hassle of heavy competition.

The woman’s hairstyle and dress indicate to me that the box was manufactured in the early 1920s, at the beginning of the Jazz Age. The young woman, surrounded by colorful confetti and dressed to the nines, has always seemed to me to be a New Year’s Eve reveler.

The City of Los Angeles had outlawed liquor about one year prior to the enactment of the Eighteenth Amendment in 1920, but the ban on alcohol didn’t prevent Angelenos from celebrating New Year’s Eve in grand style.

I picture the young lady and her beau on December 31, 1923 headed downtown for a night of dining and dancing. Both the Biltmore Hotel and the Los Angeles Athletic Club had planned dinner dances to usher in 1924, and most of the other hotels and clubs had special events scheduled, too. But if the young couple intended to sneak a cocktail they’d have to be careful because prohibition agents, police, and restaurateurs had reached an agreement: no ginger ale would be served. The policy was to prevent those folks with pocket or garter flasks from mixing a highball on the sly. Of course if the couple was in the know and had a taste for an illegal tipple they could have visited one of the speakeasies that poppe dup downtown, some of them below street level, disguised as a piano store or other seemingly harmless retail business.

Downtown was expected to get the biggest turnout of party-goers in the area, so LAPD Chief August Vollmer banned all automobiles from some of the most heavily traveled streets between 9:30 p.m. and 1 a.m.  The neighborhood would instead belong to pedestrians who could safely roam in search of merriment (as long as they kept off of the streetcar tracks; the cars ran as usual).

Eight hundred LAPD officers were assigned to downtown to keep order, but according to a local newspaper the crowds would be permitted to “yell their heads off and to blow horns, but not to throw confetti.” Still, I’ll bet that inside of the hotels and clubs there were colorful streamers, balloons, and confetti, just as depicted on the La Bara face powder box.

Regardless of how you choose to celebrate New Year’s Eve this year, I hope you have fun and stay safe (ginger ale or no). I want to see you back in the Vintage Powder Room in 2014!