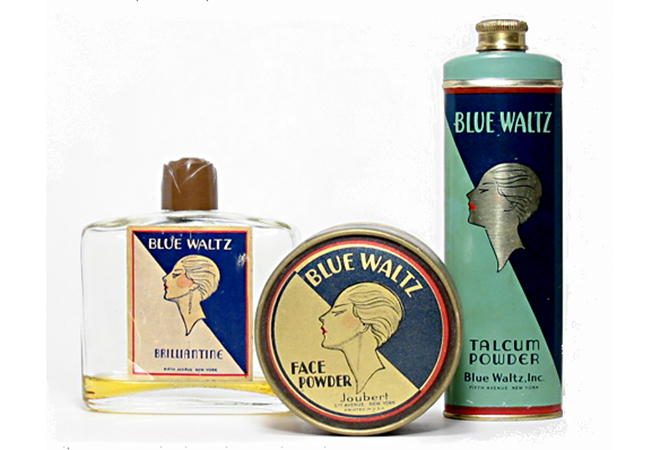 This stunning group of products, part of the Blue Waltz line by Joubert, dates from the mid- to late 1920s. I purchased the items individually over a couple of years, and together I would estimate that the set is worth over $120. The sleek, sophisticated woman on the packaging is wearing her hair in an Eaton crop, at the time a daring ‘do, and she exudes the kind of confidence that I associate with two of the most infamous women of the era: Louise Brooks and Josephine Baker. Louise Brooks was a dancer, actress, and author who became known not only for her prodigious talent, but for her hair, which was often referred to as a sleek black helmet. Brooks was the ultimate Hollywood rebel: She was too strong-willed and intelligent to conform to the vagaries of the film industry, so in 1929, after being denied a promised raise by Paramount, she left for Europe to make films for G. W. Pabst, the noted Austrian director. If leaving for Europe wasn’t enough to render her persona non grata, her refusal to return to Paramount for retakes of The Canary Murder Case certainly was.

She was unofficially blacklisted in the U.S., but it proved to be a boon for her artistically—she did her most-memorable work during the few years she was working for Pabst. Brooks starred in a few controversial and utterly brilliant films such as Pandora’s Box and Diary of a Lost Girl, which secured her place in cinema history. They were heavily censored due to their adult themes and frank portrayals of female sexuality, which are hardly quaint or precious by even today’s standards. Josephine Baker was an equally bold and accomplished renegade. Her professional career began in New York during the Harlem Renaissance, where she danced in the chorus at the Plantation Club and was so extraordinarily talented that she became the highest-paid chorus girl in vaudeville. Baker’s dreams extended beyond the chorus, though, and in 1925 she traveled to Paris and starred in an act called La Revue Négre at the Theatre des Champs-Elysees. Her flamboyant personality and erotic performances made Baker an international superstar. When she took the stage for her “Danse Sauvage,” she wore nothing but a flimsy skirt of artificial bananas that, along with her performance, cleverly subverted ideas of race and sexuality. (Ernest Hemmingway called her “the most sensational woman anyone ever saw.”) The Blue Waltz products remind me of these women who were unafraid to take chances, and whose sangfroid transcends the ages.