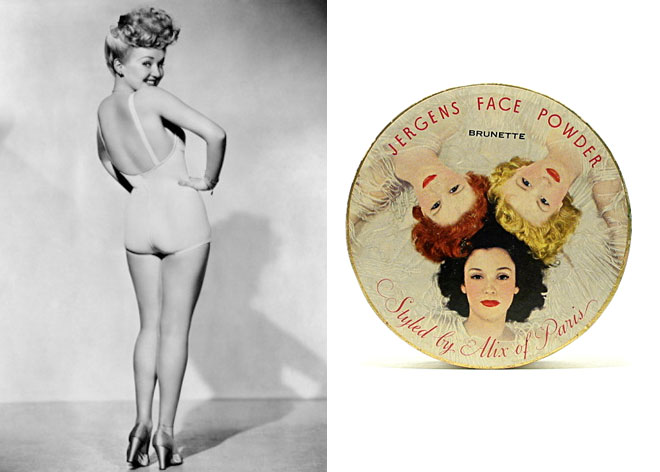 During WWII, cosmetics ads promoted powders, potions, and patriotism. While men fought on distant battlefields, women were responsible for keeping the fire burning at home and were expected to play complex and often contradictory roles—from sweetheart to munitions worker. Magazine articles on make-up and fashion reinforced the notion that it was a woman’s duty to look her best at all times, whether she was out for an evening of dancing or driving rivets into the fuselage of a B-17 bomber. At the time, pin-up photos became a must-have item for the men fighting away from home, and snapshots of shapely Hollywood stars like Rita Hayworth, Jane Russell, and Betty Grable accompanied soldiers around the world.

It’s no surprise women sought to emulate the popular sexpots of the day; I found an article that appeared in a local newspaper in October 1943 describing in detail how a woman should apply her make-up for a professional portrait, complete with tips on what to wear and whether or not a woman should whiten to her teeth prior to a photo shoot!

It’s also no surprise that brands like Jergens turned to patriotic themes to hawk their products. Famed pin-up artist Alberto Vargas was hired to create an alluring package for the brand’s face powder, which came in five shades devised by couturier Madam Alix Gres, along with advertisements that encouraged women to “be his pin-up girl.” As a result, a woman could spend 97-cents on a box of makeup and feel she was aiding in the war effort.

Evidently, all the beauty lessons of the era paid off—a postwar baby boom began in 1946 and didn’t end until 1960.