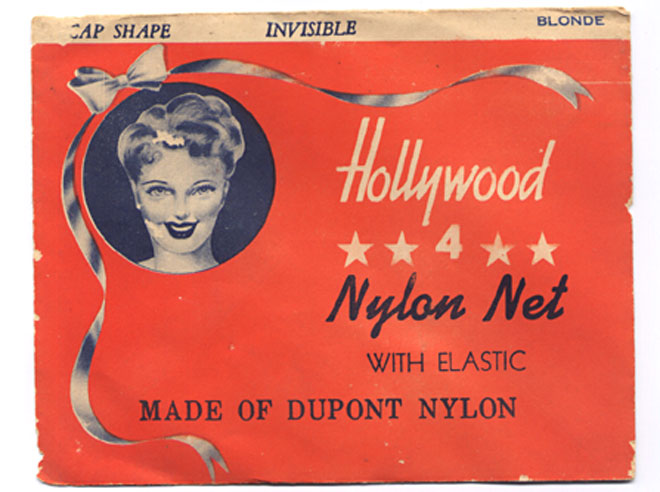 I wish that this hair net package was in better shape, but they can’t all be perfect. I know that condition is crucial when you’re collecting, yet sometimes it doesn’t matter very much to me. Regardless of the shape it’s in, I treat each new addition to my collection as a treasure, an artifact from the past that deserves to be carefully and lovingly preserved.

This Hollywood Hair Net package is from the 1940s, and the bright red color, along with the four stars, brings to my mind Hollywood’s part in the war effort. The woman depicted on the package could be a starlet awaiting her big break, biding her time as a hostess at the Hollywood Canteen.

If you were a member of the U.S. Armed Forces your uniform was your ticket to a star-studded evening. Servicemen and women could not only eat, socialize, and star gaze at the Canteen, they were treated to the best live entertainment that Hollywood had to offer. The roster of entertainers was a “who’s who” of radio and movie talent: Bud Abbott and Lou Costello, Lauren Bacall, Humphrey Bogart, Rita Hayworth, Bob Hope, the Andrews Sisters, Betty Grable, and Marlene Dietrich.

Swing dancing was enormously popular during the war years and many of the hostesses at the Canteen loved to jitterbug, but not every one of them was hip to the jive. Sometime during the evening of October 31, 1942, an overly enthusiastic Marine grabbed the hand of a hostess lieutenant, Florida Edwards, and began to spin her around the dance floor. The jiving Marine spun his unwilling partner so hard that she became airborne and landed on her spine with a crash. Florida was laid up for a month, and then sued the Canteen for $17,250 in damages.

At the close of her trial, Judge Henry Willis declared that the jitterbug was a “weird dance of obscure origins” and awarded Florida $8170 in damages. It wasn’t chump change – $8170 dollars in 1943 is equivalent to $102,331.38 today. If it were still around, that kind of cash could buy a lot of Hollywood Hair Net.