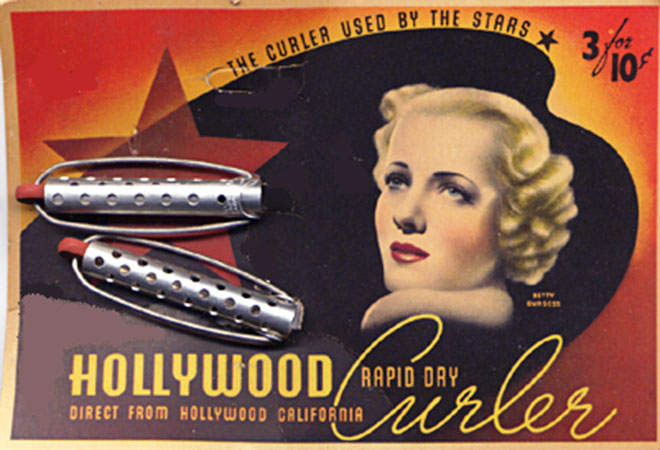 One of my favorite events is the Vintage Fashion Expo which is held a few times annually and alternates between San Francisco and Los Angeles. I’ve been to both venues in search of vintage treasures, but it was in L.A. that I found this Hollywood Curler card (c. 1935). After some haggling, I paid five dollars apiece for two of them.

The image of an actress, Betty Burgess, appears on both cards, so naturally I wondered who she was. She was gorgeous enough to have been a leading lady, yet I’d never heard of her. I concluded that she had never “made it big.”

During the Great Depression films often featured a young woman with no place to sleep, nothing to eat, and only pennies in her handbag. Ah, but the girl always had a dream that shone as brightly as a theater marquee, and in the movies those dreams invariably came true.

In the 1937 drama A Star Is Born, for example, Esther Blodgett (Janet Gaynor), a North Dakota farm girl, leaves home after seeing a movie at the local Bijou featuring her screen idol, Norman Maine (Fredric March). Painfully naive, as only a small town girl in a 1930s film could be, Esther hops a train to Hollywood where she meets her screen idol and, yes, realizes her dream of stardom.

The career of real life starlet Betty Burgess took a different path. I discovered that unlike Esther, Betty didn’t have to hop a train or board a bus to get to Hollywood. She was born in Los Angeles on February 15, 1917. Also unlike Esther, Betty’s break didn’t come through a meeting with one of her idols—she was discovered by a talent agent who was scouting local acting schools for potential clients. In 1935, after beating out forty other actresses, she won the lead role in the musical Coronado.

Betty’s performance was positively reviewed and I imagine it was because of that success that her photo turned up on my Hollywood Curler cards. Betty didn’t become a household name though; she only acted in a handful of films between 1935 and 1939, then her career abruptly ended.

Betty was talented, so I believe that she voluntarily abandoned her acting career to pursue something, or someone, she wanted more than fame. Her image on the Hollywood Curler cards reminds me that life evolves, and so should one’s dreams.