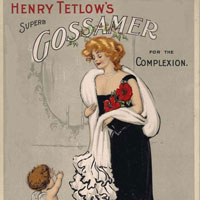 This Henry Tetlow advertising card (c. 1890) is one of the oldest items in my collection. Looking at it with 21st century eyes you probably can’t tell what is being advertised because the card doesn’t provide much information. If I didn’t know the answer myself, I’d guess Gossamer may have been a complexion cream, a powder, or something used to treat diaper rash.

This reflects the late 19th century attitude toward face powder. Makeup of any type was not discussed in polite society, although women may have shared beauty secrets with their closest friends in hushed tones at parties, or at dinners after the gentlemen excused themselves to the drawing room for brandy and cigars. So when early cosmetics companies such as Tetlow advertised their potions, they did so discreetly. Through subtle visual clues, this ad lets the savvy consumer know that Gossamer is a face powder, gentle and healthful enough for a baby’s bottom but meant to be used by sophisticated women of style.

Face powder wasn’t new in the 1890s. In fact, it had been applied by both men and women for centuries, but until the late 19th century people had to make their own out of whatever was at hand. Cleopatra herself is said to have powdered her nose with crushed crocodile excrement. Later, women of the Middle Ages longed for a pale complexion because lightness represented wealth, leisure time, and prestige (lower class women acquired their tans toiling outdoors under the hot sun). Powder remained fashion, but in limited use, during the 18th and 19th centuries thanks to various cultural attitudes towards makeup and gender.

Fortunately for us makeup lovers of today, the women of the early 20th century began a beauty product revolution, which led to powder being available in a wide variety of shades, a benefit women of all skin tones have enjoyed, and especially those in Los Angeles, where tanning became a trend among the well-to-do.

By the 1920s women were powdering their noses in public, and discreet ads, like the one for Henry Tetlow’s Gossamer, were replaced by those depicting pert young flappers dabbing their faces with swans down powder puffs. Advertising began to reflect a modern attitude toward cosmetics, and there is no longer a stigma attached to the use of face powder for beautification.

Is This Product Responsible for Donald Trump’s Orange Glow?