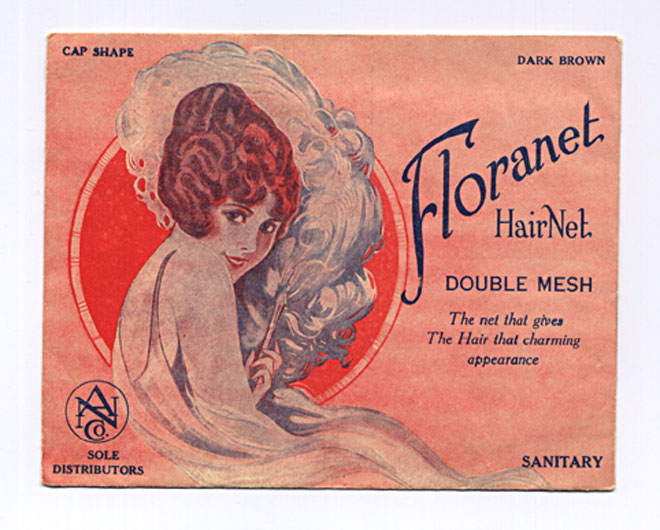 Advertising reflects its time, as design themes are frequently derived from popular culture.  Immediately after purchasing the Floranet package for about five dollars through an online auction, I began to research it. I reviewed old newspaper ads to determine the era and then searched for any cultural references. I concluded that the Floranet package was manufactured during the early 1920s and that the name was likely inspired by a revival of the musical Floradora, which originally debuted in 1899.

Researching the musical lead me to the incredible story of Evelyn Nesbit, the most infamous of the chorines, the so-called “Floradora Girls,” ever to have appeared in the play. In 1901, 16-year-old Evelyn caught the eye of millionaire architect and notorious womanizer Stanford “Stanny” White, who was 47 at the time.

White had designed an opulent apartment in New York City where he entertained young paramours. One night while Evelyn’s mother was conveniently out of the city, White made his move. He plied her with champagne and then took suggestive photographs of her in a yellow silk kimono.

Stanny maintained a strong presence in Evelyn’s life, even after she married Harry K. Thaw, a railroad barron’s son with a history of violence and drug use who was also fond of carrying a pistol and a whip wherever he went.  Eventually, Harry’s jealous obsession over Evelyn’s relationship with White drove him to confront the architect in the rooftop restaurant at Madison Square Garden. In full view of the patrons, Thaw shot and killed White.

Evelyn’s mother-in-law offered her a small fortune and the promise of a divorce if she would testify that Harry had murdered White in defense of her womanhood.  Evelyn was a compelling witness on her husband’s behalf, and Harry was found not guilty by reason of insanity. Following the trial Evelyn got the divorce, but not the money she’d been promised. She died on January 17, 1967 in a Santa Monica nursing home.