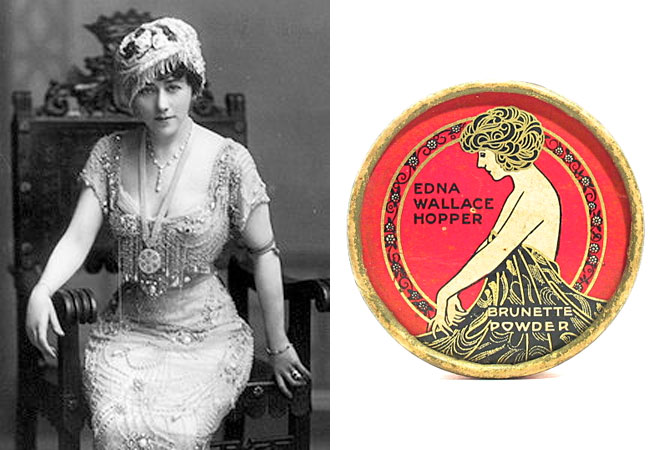 The first facelift was performed on a Polish aristocrat in 1901 and by the 1920s many Hollywood actors were having cosmetic surgery to correct crooked noses, big ears, and non-existent chins, but they kept their procedures quiet. Edna Wallace Hopper changed that.

In 1922 Edna was nearing 50 and her career as an actress appeared to be over. Long admired for her beauty, at the half-century mark Edna felt her looks were fading, so she did something about it: she had a facelift and filmed it!

The Los Angeles Times reported that prior to the surgery Hopper was regarded as “an elderly person, eligible for an old ladies’ home,” but following the procedure she was described as being “…blessed with the bloom of eternal youth.”

Edna’s surgery was performed by a woman who called herself Dr. Gertrude Steele. Steele wasn’t  a medical doctor—she was a registered naturopath and a so-called beauty doctor whose license to practice had been temporarily revoked in 1919 when she caused the death of her son-in-law during a procedure to remove freckles from his face. Nevertheless, the work she did on Hopper seems to have been a success.

Post operation, Edna forged a career out of personal appearances, where she shared her beauty secrets, showed the film of her facelift, and preached a gospel of rejuvenation to middle-aged women longing for youth. Hopper admitted that she had inherited her good looks from her mother, but said that she maintained them by taking care of her health and her skin. According to Edna her surgery combined with her strict beauty regimen made her feel decades younger.  When queried about her taste in men Edna was as giddy as a teenager and gushed: “No age limit!  I love ’em all — from 19 to 90!”

Edna’s tours and timeless good looks soon caught the eye of an advertising man, Claude C. Hopkins, who worked for American Home Products. Hopkins approached Edna with a proposition: a line of cosmetics and beauty treatments bearing her likeness and name. Edna was an astute businesswoman who recognized the opportunity as a potential goldmine, and she was right; her line of cosmetics and treatments continued to be sold well into the 1940s.

Hopper had taken the very public step of filming her facelift, yet she would remain coy about her age.  She said: “People have been guessing my age since 1918. I just let them go ahead.  All records of my birth were destroyed in the San Francisco fire.”

When she died in 1959 people didn’t know if she was in her 80s or 90s—she had remained coy about her age—but the detail wasn’t important. She was eternally youthful where it counts: in her spirit.