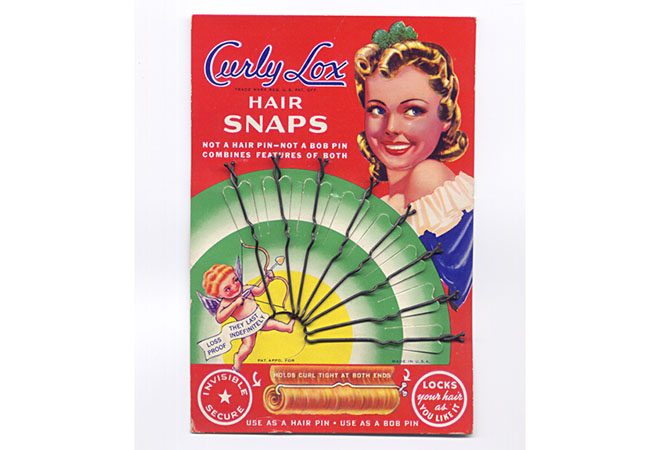 I won the Curly Lox Hair Snaps card for under $8 in an Internet auction about 10 years ago, and I would have paid at least twice as much for it, because I find the design so appealing. The vivid red and green are evocative of the Mexican flag, and the woman on the card instantly brought to mind one of my favorite screen stars of the 1930s and 1940s: Lupe Vélez, aka the “Mexican Spitfire.” The woman on the card is wearing her hair in a style that was popular circa 1939—the likely manufacture date of the card, and the beginning of Lupe’s heyday in Hollywood.

Lupe arrived from Mexico in 1927 and was soon spotted by Hal Roach (best known for producing the Our Gang and Laurel & Hardy series). Roach cast her opposite Laurel and Hardy in a silent short entitled Sailors, Beware!, and not only did she hold her own alongside the two seasoned performers, she displayed a natural flair for comedy. The petite Lupe had a fiery personality both onscreen and off, and nearly every article written about her during the 1930s and 1940s described her as tempestuous and volatile—and she was. She had a well-publicized romance with Gary Cooper during the late 1920s, which seems to have been torpedoed by his mother. After her relationship with Cooper ended, she would tell reporters that he may have been a star to his mother, but in her eyes he was nothing.

Her romance with Johnny Weissmuller, Olympic champion swimmer and star of the Tarzan films, was no less explosive. Despite their public contretemps, the pair married in 1933; predictably, it didn’t last. During their divorce hearing in 1938, Lupe complained to the judge that Johnny wanted to kill her little dog and often frightened the poor thing so badly it would turn tail and run yipping to seek shelter in her lap. Apparently the same man who called lion, tigers, elephants, and crocodiles to him with a powerful ululation couldn’t make friends with his wife’s Chihuahua.

Her misadventures in love would ultimately cause Lupe to take her own life at age 36 in 1943, with nasty rumors swirling around the circumstances of her death. But rather than think of her as a tragic figure, I prefer to remember her as an irrepressible force of nature who always had something provocative to say about love. My favorite: “The first time you buy a house you think how pretty it is and sign the check. The second time you look to see if the basement has termites. It’s the same with men.”

Anyway, this is a long way of saying that the vibrant design of the Curly Lox card reminds me of the fearless, talented Lupe Vélez, who may have used this bobby-pin hybrid to hold her own luscious curls in place. And although she’s been gone for decades, she will radiate on screen for many more.