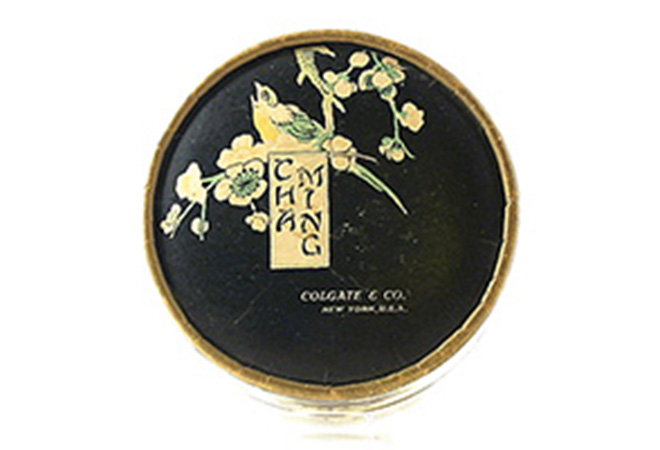 I purchased the Colgate Cha Ming face powder box (c. 1922) in an online auction about a dozen years ago. The design is beautiful in its simplicity. However, because it isn’t as colorful or flashy as others from the same period, I paid very little for it—about $10.

As far as I know, Cha Ming is not a Chinese phrase, and was most likely the invention of someone at Colgate who thought it sounded romantic and exotic. The Colgate Company was not alone in its fascination with foreign locales during the 1920s. They were merely capitalizing on a recent trend in the lives of average Americans—travel. More middle-class Americans were traveling then than in previous decades, but the fortunate residents of Los Angeles only had to go downtown to visit Chinatown.

Chinese immigrants began to arrive in Los Angeles as early as the 1850s, primarily to work on the railroads, and by the 1920s, there was a vibrant neighborhood near the railroad tracks across from the Pueblo. Xenophobia and ignorance had resulted in the Chinese Exclusion Act of 1882, which, among other constraints, prohibited the Chinese from owning property. The fact that the Chinese didn’t own the land beneath them made that particular tract an appealing construction site for Union Station. Rumors of a central station that would replace Chinatown, and the multiple train stations that dotted the city, had been circulating for years. In 1914, L.E. Hanchett, a San Francisco developer, purchased the land for $2 million. He claimed he planned to build warehouses and factories on the site, and he was particularly adamant that he wasn’t going to build a railroad station—but that was a lie.

However, there was a major glitch in Hanchett’s plan—neither he nor the city of Los Angeles had anticipated unyielding opposition from the railroads. Rich as Croesus and as powerful as a magnitude-10 earthquake, the three transcontinental railroads (Southern Pacific, Union Pacific, and Santa Fe) wanted nothing to do with a Union Station, so they dug in their heels and lawyered up. It would take nearly two decades, and several appeals to the U.S. Supreme Court, before the city won the right to build Union Station in 1933. Chinatown was demolished and its residents scattered. The station opened on May 3, 1939, to raucous fanfare and enormous civic pride.

This Saturday is the 75th anniversary of Union Station. It is an exquisitely artful blend of Spanish Colonial Revival and Art Deco architecture as conceived by a master, John Parkinson, and it is one of my favorite Los Angeles landmarks.

When I hold the charming Cha Ming face powder box in my hands it becomes a time machine, allowing me to visit the community that once occupied the space where Union Station now stands. I am grateful that Chinatown did not vanish from the cityscape—it relocated a few blocks northeast to Broadway where it continues to thrive.